If you ever wanted to admire a chaotic mish-mash mixture of custom designed fishing vessels then Lake O is the place.  Every angler has their own personal preference.  All the others are wrong.  Naval architects should look away.  It is worth the trip just to see the variations to the same theme.  Some deep thinking has been applied to achieve the best trout stalking machines available.

It is nothing to do with power or speed or water safety or buoyancy or stability or beauty or seamanship.  Design parameters are controlled to define the sneakiest vessel for catching trout.

The worst crime on Lake O – even worse than poaching – are those enthusiastic fizz-boats that speed up and down leaving a great wake to put down all the trout and ruin the fishing for everyone else for the rest of the day.  At the very least, they should be hung…

NOTE: The speed limit on Lake O is 5 knots.  The sneaky quiet poachers approach is best – as indicated by the small selection below…

Proud Skipper – Barry Stuck from Hamilton.  (To indicate how effective his trout stalking machine is, he has already booked his unit for all of February 2017)

Ride-on kayaks and canoes and surf boards etc. do not qualify as they are too successful in penetrating weed beds where boats cannot go.  Izaak’s ‘waders’ have been banned too.

TRM rafts have a bloody great hole in them?

But they still work…

They look stable enough but how do you steer them?

The winning Cadogan team with their plastic-fantastic design which regularly catches the most Lake O trout every season.

Eddie, the Lad, was out from the UK where he currently lives, so Dad and Lad, the ‘A Team’, of course set up for a bout of fly-fishing in the Taupo region of Central North Island, NZ.

We spent one day of our time together on Lake Otamangakau, up on the volcanic plateau above Taupo. Otamangakau’s trout are rightly renowned for the strength and endurance they exhibit between hook-up and net. That is if you can get the fish to the net. Many become un-hooked fish, departing at flank speed followed by a stream of very naughty language indeed.

The lake also has a deserved reputation for being very reluctant to share its trout with visiting anglers. Most times the fishing verges on hard, often very hard. But put in the ‘hard yards’ as they say, and the rewards are very satisfying.

We fished with Contact Guide Graham Dean, one of the most knowledgeable Guides on Lake Otamangakau’s intricacies. I have fished with Graham before and know when he describes the state  of the fishing, he does not mince words, This day the word was that the fishing was officially ‘hard’, but we left satisfied – a number of good fish always leave a bit of a warm glow. 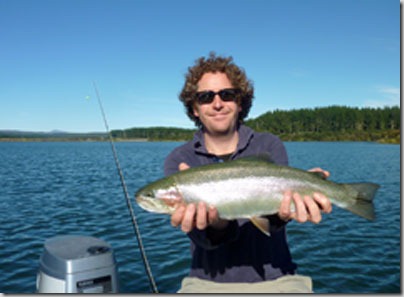 Eddie shows off a typical Lake O trout, well-rounded and packed with muscle. Most anglers when they first hook-up on on one of these fish will call it for being much bigger. 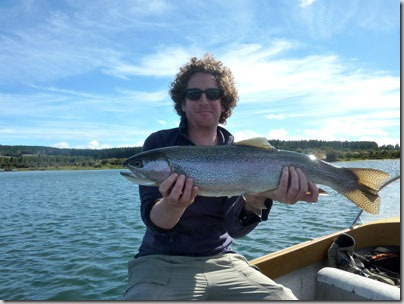 An excellent fish, that really gave Eddie the run-a-round. All the fish we caught were on blood worm imitations twitched very slowly back to the boat, 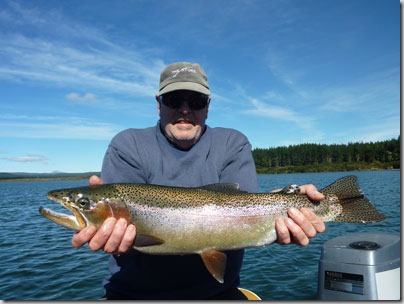 Dad, a.k.a Bish, in incognito mode, with a very nice trout.