Have another squiz at the above images.  Can you identify something strange in Jason’s casting technique above and below – one of TRM’s favourite (and best) anglers in action?  Does it make you feel slightly uncomfortable?.  Have you noticed the terrible technique?  Too late for lessons now – he should have been taught how to cast ‘properly’ with his other arm years ago. 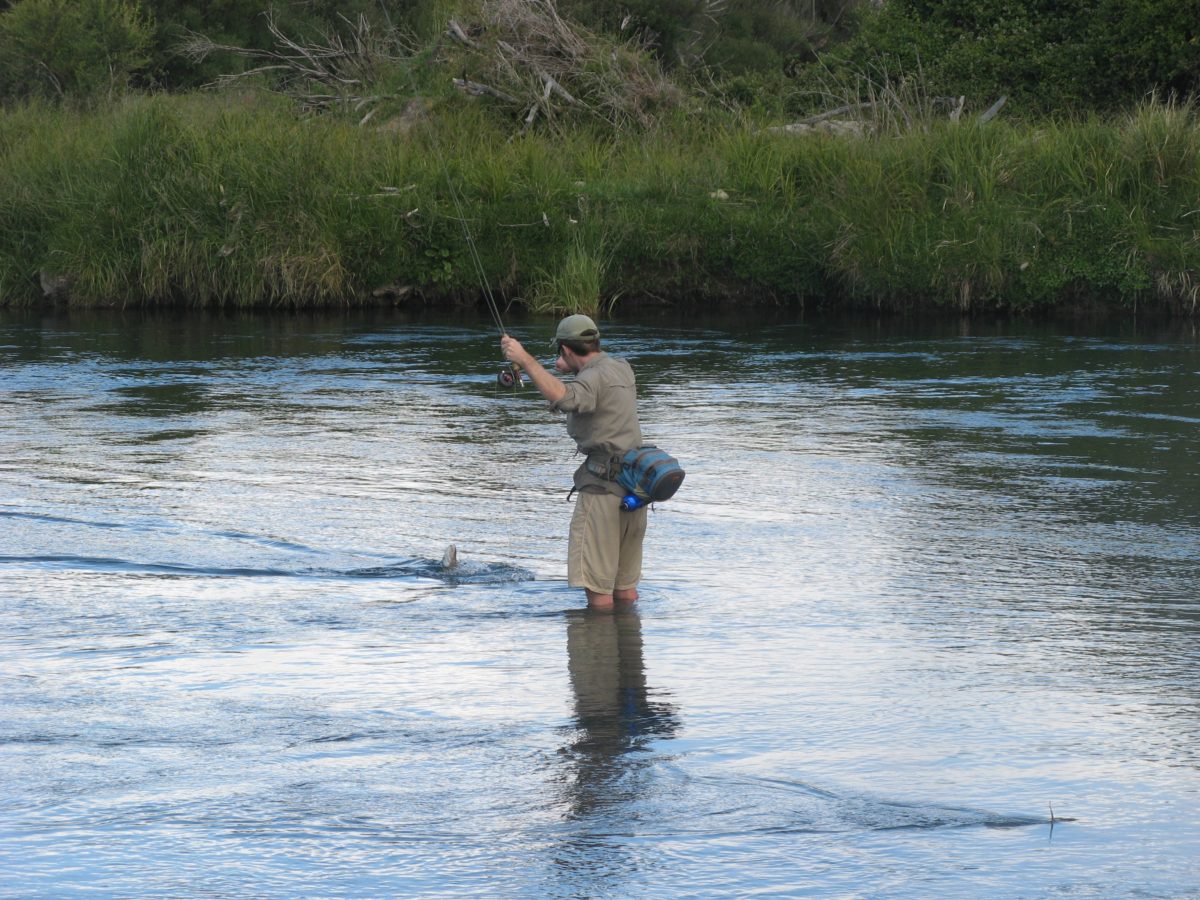 SWMBO is surprised how many of TRM’s more successful inmates are left handed.

Sorry to pick on you Jason as we could have chosen many other inmates but did not have so many images of them actually casting and fishing.  There were just too many photos of them holding big trout – like Terry Sutton below.

At first you might imagine the trout do not know the angler is a leftie, so there is no advantage?  But not so…  For fly fishing on the Tongariro they definitely have the advantage of being able to cast from positions where ‘right handers’ dare not venture as they usually end up with a fluffy fly hooked through the left ear.   As most of these spots are avoided by most ‘proper’ right-handed purists they have an advantage.

So specially for them and in reply to a request from an inmate we have listed a few spots limited to the town pools and middle pools favouring their cack handed flicking style.

These are not the big well known pools on the TLB (like Bridge Pool, etc.) but some of the lesser known spots where correct and proper right handed gentlemen anglers might encounter difficulty trying to flick their fly into the eye of the run.  All are on the TLB favouring their crude unfair style.

There are several places in the Braids but most are too difficult to describe and the pools change character so often that comment has been confined to leftie spots above the road bridge.

The Daisy Pool is a good example located just above the road bridge on the TLB (True Left Bank) accessed from under the bridge (Jim Rowland will curse me for even mentioning it.)

Then there is the TLB of Judges but access is too difficult and there is no room for any back cast – restricted to roll casts which can also be achieved by right handed anglers almost as well.

Next is the Doctors Pool at the tail of Island Pool – perfect for lefties. Further up river the Never Fail Pool island favours cack-handers too. Ditto the TLB above Kamahi – access from Admirals car park.  Lefties definitely have the advantage from the tail when the Admirals Pool is loaded.

From then on up the TLB of Stag all the way up to Cattle Rustlers there are many lies which are best reached by ‘south paws’.  For them they are all ‘Never-fail’ pools.

Fortunately fly fishing gear is all ‘ambidextrous’ as reels can easily be swopped over to suit everyone.  Similarly for tennis players but not for many sports like golf.

There are many negative connotations associated with the phrase “left-handed”: clumsy, awkward, unlucky, insincere, sinister, malicious, and so on. A “left-handed compliment” is considered one that is unflattering or dismissive in meaning.

In many European languages, including English, the word for the direction “right” also means “correct” or “proper”.  Throughout angling history, being left-handed was considered negative.  This particularly applies on the Tongariro…

If you imagine this prejudice does not apply to fly fishing you might be mistaken?  The lefties have a peculiar advantage of being able to cast into riffles, runs, eyes of pools, that the rest of us purists cannot reach.  Obviously quite unfair.  If Trump was an angler he would ban them…