The Timber Trail – located in a much more wilderness location requiring huge swing bridges through far more difficult terrain cost – depending which report to believe – between $5.5 to $6 Million = $71/metre?  What?  Why?  How?  Locals thought the T2T estimate must be a mistake?.  That is the question that has bewildered everyone.  Surely a bike trail along the shores of Lake Taupo following SH1 would cost far less?  Instead, Council’s “consultant” (?) estimated the cost at over six times more?

TRM checked with the Ministry of Business Innovation and Employment who recently (May 2017) published a new guide based on actual construction costs from many other “great rides”.  They confirmed the T2T estimate was grossly over inflated.  Their analysis suggested an average cost for a standard gravel track with no significant structures such as bridges, tunnels, etc. to be around $100,000/km.  That would suggest a basic trail cost of $4.2 million plus under-passes, clip-on bridge for Waitahanui, swing bridges for Hinemaiaia, Halletts Bay, Waimarino, Waiotaka, board-walks, etc. plus – say – $2.0 M = Total of $6.2 Million…

A recent hui at Turangi by prominent local Maori elders – concerned about not being consulted – confirmed they would welcome and support any initiatives to build a bike trail around the lake shore.  They acknowledged all the likely benefits to all the small Maori villages from such a trail.  So – after several years of futile discussion – why did it not happen?

(TRM commend DGLT (Destination Great Lake Taupo are the Taupo Council’s tourist promotions office) General Manager, Damian Coutts, and Turangi Councillor Tong Kingi, for their continued support and close interest in this T2T project, so we can reassure local bikers and guests that it will happen, one day... Please be patient…)

(From Timber Trail Lodge director Bruce Maunsell on its first five weeks of operation, the repercussions of the Tourism Growth Partnership being scrapped and the pressing infrastructure needs in the King Country and beyond…)

The Timber Trail Lodge opened with 25 beds in April so it’s coming up five weeks now. The response has been phenomenal, it’s exceeded what we’d hoped for in terms of occupancy.

We budgeted on around about 20% occupancy overall for this first period but we’re at 50% – twice where we thought we would be.

We are really concentrating on the direct market and smaller agents who are specifically cycling orientated.

We simply decided we don’t want to give away too much margin. 20% – 30% just leaves me cold so we are staying away from the wholesale markets, at least for the time being.

The response has been a little bit overwhelming in respect of staffing. We employed two managers – which we thought would be enough – but we’ve had several capacity nights so the staffing requirement has been more than we anticipated.

Staffing is going to be an on-going challenge because of the remoteness of the lodge. By the end of winter we will have staff accommodation plus the second wing of the lodge will be finished, giving us a total of 50 guest beds across 20 rooms.

The seasonal market means we’re expecting a long cold quiet first winter so we are starting to plug mid-week riding through the off season, and we’ve just made a commitment to keep the lodge open and employ managers right through the winter.

The Timber Trail is on Department of Conservation estate and some iwi land so DOC manages the trail. They have a limited budget – only about a third of what is required – but current policy means they cannot access any other trail maintenance funds available through MBIE and other entities.

We want to improve the governance of the Timber Trail so we can access other funds. We’re having a hui at the Lodge with some people from Project Tongariro, an NGO that’s done a really good job of working with DOC to enhance and maintain the infrastructure within Tongariro National Park.

We are interested in their model and would like to set up something similar that DOC supports through its budget but which can access other funds.

We’ve also got customers asking how they can contribute to the upkeep of the trail and we want to be in a position to be able to facilitate that.

We received $1.2m from the government’s Tourism Growth Partnership that has just been scrapped. We were bloody lucky with our timing and we appreciate that we were. At the time we thought it was possibly not sustainable for the government to be giving away that sort of money but on the other hand I am very optimistic about our operation and the benefit it is going to bring to the Timber Trail.

The government spent close to $6m developing the trail, and we will be an important factor in that investment actually being realised. Our feeling is at the moment numbers are around 7,000-8,000 annually and we will take it to 10,000 or 12,000.

That wouldn’t have happened if we hadn’t come along, and we would not have gone ahead with our project – certainly not on the scale we have – without TGP assistance, it just wouldn’t have stacked up.

We applied for $1.2m and at that stage our budget was about $2.7m. We’ve ended up spending $3.2m due to subsequent expansion so about 40% of our capital costs were covered by the grant.

I’ve had two consultancy projects lined up that I thought would have a reasonable chance of qualifying and they’re just being canned. Those two projects will not go ahead now, so there is some negative effect from TGP being canned, but the infrastructure needs are urgent and should be prioritised over private investment.

There is a real need for infrastructure on the DOC estate. The Tongariro Crossing, close to where we operate, is an extreme example of desperate need for organisation and structure as well as facilities. I think its ridiculous that so many people who have got no idea what they are doing are being let loose on a mountain without any guidance or control. And the lack of toilets is an insult to the environment.

Similarly on the Timber Trail, to a lesser extent, there is certainly a need for toilets and the ones that are there are sometimes not being maintained adequately. When there are facilities people are really appreciative of them. We get comments from our guest saying how impressed they are with the signage, and the bridges and what toilets there are but they all say there needs to be more.

The Timber Trail, originally known as the Central North Island Rail Trail or Pureora Timber Trail, in the North Island of New Zealand is an 83 kilometres (52 mi) cycleway (also used by walkers and hunters) in Pureora Forest Park, fully opened in 2013, with 35 bridges (built by DoC staff, community max workers,[1] or contractors),[2] including 8 large suspension bridges (one of the longest on a NZ cycleway, much more stable than the swing bridges used on older tracks). It is one of several cycleways developed as part of the New Zealand Cycle Trail and passes through podocarp forests of rimu, totara, miro, matai and kahikatea, as well as some exotic forestry and regenerating bush. About half the trail is on the track-bed of an old bush tramway, including a spiral and tunnel.

It is easiest to ride downhill from Pureora (elevation 560 metres or 1,840 feet) to Ongarue (200 metres or 660 feet). Fit riders can cover the trail in a day. Accommodation and cycle transport can be arranged at Pureora Cabins, Pa Harakeke (campervans, camping and two chalets), Pureora Forest Park Lodge (up to 50 guests), or Blackfern Lodge, Waimiha (from the middle of the trail).[3] An alternative is the 4 bed Bog Inn Hut, built of totara slabs, at the foot of Mt Pureora, 2 kilometres (1.2 mi) off the trail. It originally housed scientists studying a nearby wetland.[4] Since 2013, several local farmers and B&Bs have been offering nearby accommodation, meals, and shuttle services for the trail.

The trail begins in Pikiariki Ecological Area, about 200 metres (660 ft) from the DOC Pureora Field Base on Barryville Rd, turning left a few metres into the bush, on a boardwalk, then winding some 4 kilometres (2.5 mi) through tall podocarps (frequented by kaka[5]), over Whareana Stream, through a Douglas fir plantation, across Whareana Rd and Cabbage Tree Rd before winding up through an area of regenerating toitoi, cabbage tree, five finger and kamahi. It crosses Tui Rd, to the shelter below Mt Pureora.[5]

Uses a logging road for some 6 kilometres (3.7 mi), then mainly Okauaka Road. 500 metres (1,600 ft) beyond the concrete ford and neighbouring trail bridge over Okauaka Stream, the track joins a tramway, crosses Okauaka Road again, and continues through the bush to Kokomiko Road and Piropiro campground. After the campground, the track rejoins the tramway to Maramataha Rodd, then follows Piropiro Stream on a new track to the Maramataha Bridge.[2] 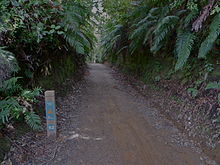 A 30 minutes climb from the Piropiro campsite leads to the 141 metres (463 ft) Maramataha Bridge, some 60 metres (200 ft) above the Maramataha Gorge and the largest suspension bridge of its kind along any cycle trail in New Zealand. Construction required much rock drilling and anchor work. It is supported on 12.8 metres (42 ft) high glulam towers.[2]

South of the bridge the steepest climb on the trail zigzags to a plateau on a new track. From the plateau quad tracks lead to the north end of the Ellis and Burnand tramway, which the trail then mostly follows on easier gradients to Ongarue. These tramways were cleared in 2011.[7]

A three span, curved, timber trestle bridge crosses Goat Creek, resembling many of the tramway bridges,[2] then 4 kilometres (2.5 mi) of tramway cleared in 2011 leads to the spiral.[7]

Ongarue Spiral took the tramway up 43 metres (141 ft) on a grade the bush lokeys could cope with (for 6 kilometres or 3.7 miles the gradient averaged 1 in 30).[8] Below the spiral the tramway was built by cutting a ledge in the ignimbrite cliffs. It continues to drop until reaching the bank of the Mangakahu Stream. The final 4 kilometres (2.5 mi) are undulating to the end of the trail in a car park beside Mangakahu Road, 2 kilometres (1.2 mi) from Ongarue.