Last weekend more TRM inmates enjoyed their raft fishing trip down the Tongariro River with RaftingNZ.  Several days later he was still buzzing from the trip and sent us his email to them and his comments in his Club Newsletter as follows:

Hi,
We wanted to write and thank you all for making our day (Sunday 7th Feb) an absolute ripper!  D has wanted to fly fish the Tongariro river by rafting for many many years, and it was great.  From the moment we arrived at RaftingNZ we were well attended to.  We were really lucky to have Craig and Ariana as our raft captains (?) for the day.  We were treated with the utmost respect, safety was always paramount, each rapid we came to was explained to us beforehand, e.g. the name of the rapid and how to ride it, what to expect.  Knowledge of the wildlife was shared, they were easy to talk to and fun to be with – thank you to them both very much – they represent RaftingNZ in a most positive light.  Your company’s general service and Craig and Ariana’s exemplary friendly professionalism mean that we will recommend your company to all our friends and D’s fishing buddies.  Kind regards

Fishing Club Newsletter:
As I write this I have just returned from a trip to Turangi with my wife C. Some months ago C shouted me a Fishing Raft Trip down the Tongariro for my birthday. (It was one of those special birthdays with a ‘0’ in it). Stunning. Primeval. Spectacular. Amazing. Pick an adjective. It truly was an incredibly enjoyable day and I can recommend it to anyone. Free rising Trout and every last one taken on the dry.   We went with Rafting New Zealand. Helpful, informative, easy to talk to and a very well laid out headquarters. Our two young ‘Guides’ were an absolute credit to their company and they helped make the day perfect. If you ever get the chance to do this trip then jump at it!

Which brings us to today’s fishy topic:  As previously mentioned RaftingNZ generously sponsored a raft fishing trip on the Tongariro River during February for TRM’s Manager but She quickly decided She was far too busy and offered it as a prize for some lucky guests.  The problem was how to randomly select them?….

SWMBO (She Who Must Be Obeyed manages anything controversial such as road signage rules on SH1 in the Central Plateau Region) decided the traditional way was to draw names out of a TRM hat.  That seemed the fairest way.

But on closer inspection She found this more difficult than supposed?  Some inmates are with others and it would not be fair to take one angler without the other?  Others are sharing BIG family units with 4 fishos together and the raft only holds maximum of 3 anglers.  One fishing group is from New Caledonia with four, another from Europe with four, etc.  One American (Hi Jason) did the same TRM sponsored trip with Kiki so he was disqualified.

I was hoping one of the studios would win as the inmates are two young Swedish blondes but somehow I sort of knew in my heart they wouldn’t win as they knew nothing about fishing and would definitely need me as their fishing guide. 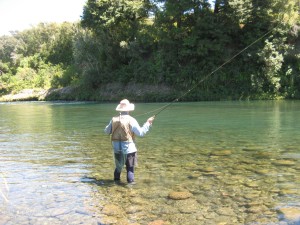 Anyway, after much consideration and procrastination and discussions with everyone (except me), in the end SWMBO decided to draw unit numbers and take it from there.  This is what She thinks is fair?

She should be reported to the lotteries commissioner.  She set Herself up as judge to then decide if the winner was suitable.  i.e. Young Swedish blondes could never qualify?  That is so unfair.

Then She got the staff to do the draw to show how fair She was?  Naturally the staff wasted most of a day just completing the draw. 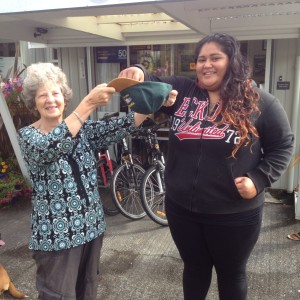 If anyone disagrees with Her ballot system they have to complain to Twiggy – SWMBO’s latest housekeeping staff member – completing the (phony?) draw – see photo on left.

But I still have a feeling this had to have been rigged.  That was the only way She could fill the raft to maximise the opportunity for inmates.  That is so commercial…

She even limited the raft trip to Monday 15 February next week, when She knew I had to go to Taupo and to fit in between Her endless shopping trips.

It gets more complicated as Her rules for this competition were that only fishos wearing TRM lucky hats could qualify.  That proves how ‘lucky’ TRM hats can be. 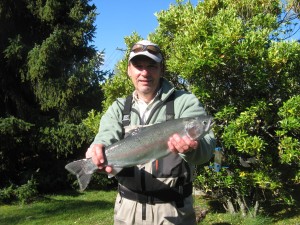 Then in Her infinite wisdom She decided to draw one more to fill the raft.  The winner was Unit 3 who was staying here with his wife who does not fish.

So that is the ace crew which proves it was rigged as none are Kiwis.

Unit 1 claims to still be a Kiwi whenever we win the footy as he was born in NZ but now lives in Sydney and following the recent wave of immigrants he plans to retire back in NZ.  Unit 2 is originally from Mt. Maunganui back in about 1930 but retired to Sunshine Coast.  Unit 3 is from Ballarat but suffers a distinctive Scottish (Single Malt?) accent so may have had assisted passage to West Island as a convict.

The good news is that they are all TRM regular BOF’s (Boring Old Farts) who know each other from previous visits and have not done the Tongariro raft fishing trip before.  Or that might be how She “randomly” (?) selected them.  Or She should have gone to spec savers?   If I was them I would buy a Lotto ticket.

That is all we can say at this point as they can prepare their own versions of their raft fishing trip for the Daily Report next week.