This is TRM’s fourth blog on river and lake water quality issues.

On Monday we posted a warning on the loss of traditional recreational and fishing places such as Lake Tutira and the Selwyn River.

On Tuesday we tried to provide some balance with stories of restoration of a few other threatened waterways.

Today’s report comments on Dr. Mike Joy’s recommended solution for the recovery of rivers and lakes.  I suspect he must be a fresh water angler to think like he does…

Food for thought on farm practice.

The audience is absorbed as Massey University freshwater ecologist Dr Mike Joy discusses “The Future of Food” at the University of Otago.  (PHOTOS: LINDA ROBERTSON)

A big rethink is needed over the amount of nitrogenous fertiliser being used on New Zealand farms if the country is to clean up its lakes and rivers and maintain its clean, green image.  That is the view of freshwater ecologist Dr Mike Joy, who gave an open lecture on “The Future of Food: Our deadly nitrogen and fossil fuel addiction” last evening.

He was addressing more than 300 people at the University of Otago’s St David lecture theatre.

Dr Joy is a senior lecturer in ecology and environmental science at Massey University, Palmerston North, and the talk was hosted by Otago University’s Centre for Sustainability and Ag@Otago. 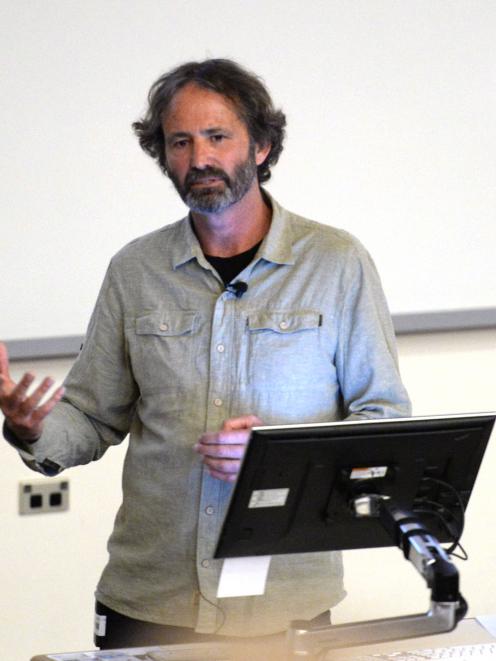 There was growing community awareness of the need to clean up the country’s rivers and lakes, but this could not be achieved unless there was a drop in “all of the nitrogen that comes on to farms” and was applied as fertiliser, Dr Joy said in an earlier interview.  Runoff from farms into creeks, rivers and lakes was damaging water quality, and contributed to many ecological problems, including algal blooms and lake snow.

Much of New Zealand’s international appeal depended on its “clean green” image, but that image was being put at risk as New Zealand continued to farm unsustainably, making too much use of nitrogenous fertiliser and fossil fuels.

The emergence of rival products such as artificial milk and artificial meat also posed big threats.

New Zealand should add more value to high quality exports rather than seeking to “bury our heads in the sand”.

Dr Joy received the Royal Society of New Zealand’s Charles Fleming Award for Environmental Achievement in 2013 for his contribution to the sustainable management of the country’s freshwater ecosystems.