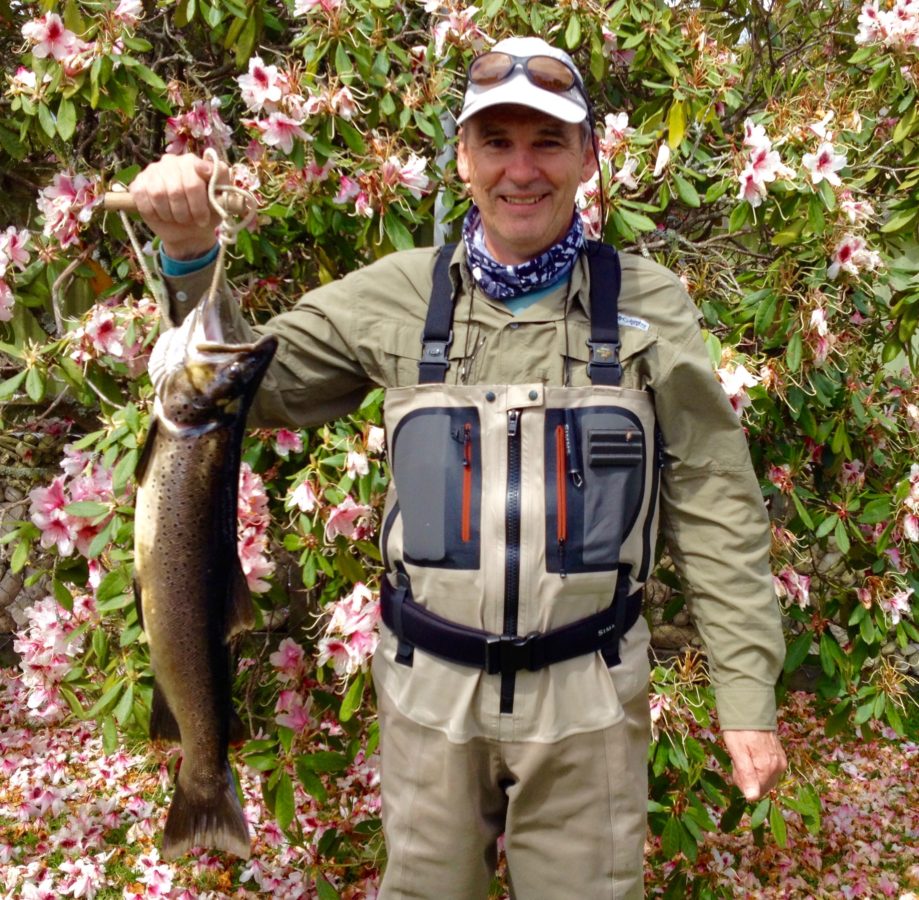 Below is an encouraging email by a West Island TRM inmate who just enjoyed his best week ever on the Tongariro – this is for all those anglers confused about the varying reports on the 2016 season. 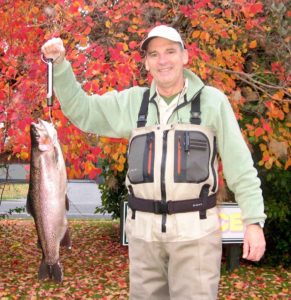 Several other TRM anglers have voiced similar comments – 2016 as their best most productive fishing trip ever, etc. but it was all about timing.  The general pattern kept changing almost daily.  Each time our fishos thought the spawning runs are peaking and started to get confident, they would suffer a blank day or two for no reason.  Quite frustrating for many.

So Paul wrote: ………. 2016 has been my best year on the Tongariro.  I fished it in Feb, Mar, Aug and Nov.  In Feb I had an absolute ball on the Cicada and dry, in March when I found a match for the lace moth or passion vine hopper I had a productive time, in August I won the Kotare Trophy hammering my competition and in November .. Well signage will never be the same. 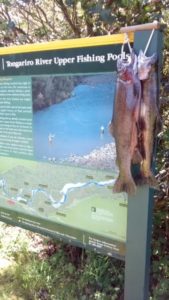 My secrets.  When you arrive at a spot study the run carefully, keep changing flies, experiment with weight, keep changing pools (even after multiple hits in a short period of time).

Above all relax and enjoy the beautiful environment you find yourself in.  Listen to the water, watch the bird life, feel the sun and breeze on your face.  As crazy as this may sound, your vibe is picked up by the trout and they react accordingly.

Below is TRM’s previous report on the Kotare Trophy history:

At TRM we have many small groups of anglers – to call them ‘clubs’ would be too strong? – who meet here on a regular basis to fish the Tongariro in a casual socially competitive manner.  We thought this competition below might be of interest to them to do the same…   To help the determination, perseverance and competitive juices to flow, I asked if they could elaborate on the background of their competition rules for others.  Thanks Paul & Geoff – two of TRM’s favourite inmates worthy of their BOF (Boring Old Farts) status… 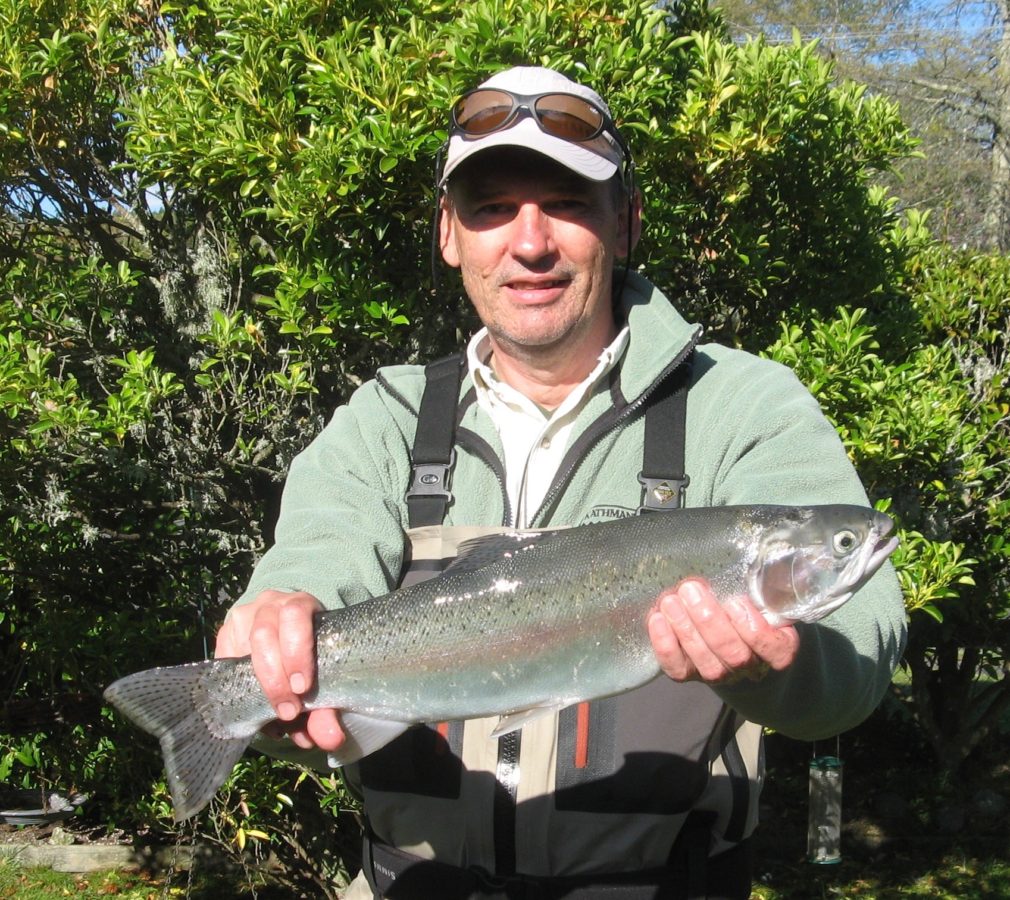 The History of the Kotare Trophy 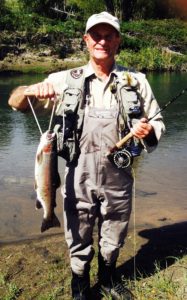 I met my fishing buddy Geoff Shier back in August 2006. I had been staying in a holiday house in Turangi doing a little wet lining on the mighty Tongariro (sorry Ross – on both counts) when I received a text from Geoff’s brother Nick, an old university colleague. Apparently, Geoff was in Turangi with some mates and would I like to catch up to watch the All Blacks thrash the Wallabies at Eden Park that evening at the pub. While I live in Australia I always barrack for the All Blacks and any other team playing the Wallabies … so I was in.

To cut a long story short we all got on famously and I was invited to join the boys the following morning at the Delta. After nailing a couple of beautiful 60cm plus hens in quick succession I was amazed and grateful, to be presented with breakfast on the boat comprising a generous slice of a homemade bacon and egg pie and freshly brewed coffee. I remember thinking to myself at the time … this is heaven … especially as I watched Geoff very carefully play a great fish from the lip of the delta drop off with a piece of pie in one hand and a coffee in the other!!!

At the time, Geoff was living in Auckland and as I came over to Auckland regularly on business and to catch up with my family we always managed to sneak in a weekend at Turangi. Both Geoff and I are quite competitive so it didn’t take long for the bragging to start about the number of fish caught the size of the fish etc etc. I do recall that the best weekend I had with Geoff was in April 2007 where, in a 24 hour period I landed 19 fish and lost just as many. I hasten to add, Geoff did pretty well too. 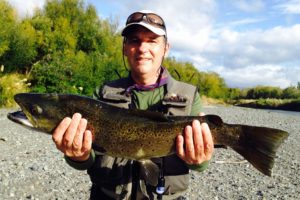 In 2008, the World Fly Fishing Champs were held in NZ. It was then that the penny dropped … a way to measure bragging rights … the FIPS-Mouche method and what better way to celebrate the best fisherman than having a trophy we could compete for. It took a few years for it to all come together (but this didn’t stop us fishing!) as Geoff had moved from Auckland back to his home town of Amberley just north of Christchurch. In early 2010 the Kotare Trophy was born. For those of you who are not aware, Kotare is Maori for Kingfisher, a stunning NZ native bird renowned for its fishing abilities on rivers and streams.

A friend of Geoff’s, Len Smith, who lives in Amberley and turns wood as a hobby had started making magnificent breadboards from laminated NZ native timbers. An appropriate breadboard became the base for our trophy. We decided that an old fashioned fly reel mounted on the board would make a noteworthy and iconic statement. Geoff trawled Trade Me for months trying to find something suitable and finally it appeared … a 100 year old timber and brass fly reel … in working order. Len duly mounted the reel on the base and the Kotare Trophy came into being. 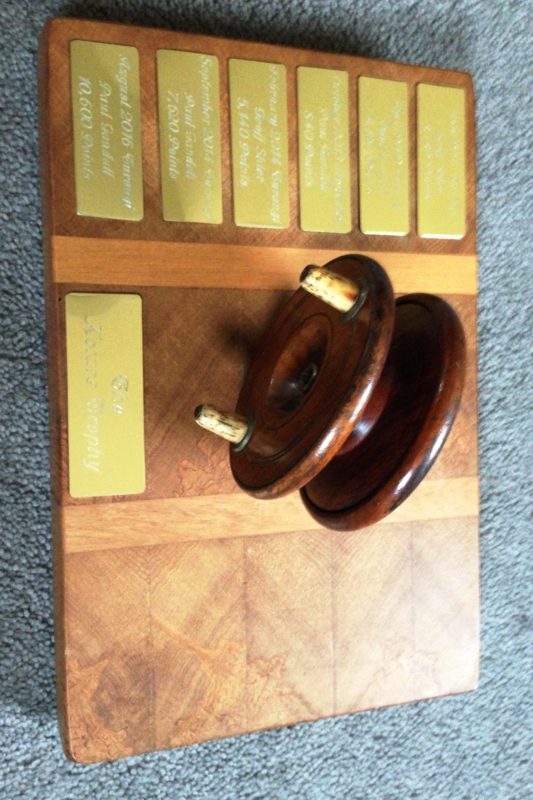 Over a few single malts around the fire one winters evening in Amberley during 2010 we set the rules. Pretty simple stuff and as mentioned based on the FIPS-Mouche methodology. For each fish over 180cm (we were very generous!) that fish would be awarded 100 points plus 20 points for each cm or part thereof. The party with the greatest number of points at the end of the competition would be declared the winner and have his name, fishing location and total points engraved on a plaque which would be mounted onto the trophy. In addition, we decided that a competition would require that Geoff and myself both be fishing and that we mutually agree on a start and finish date and time. This meant that guests could also participate – but Geoff and I both had to be fishing … and if in the unlikely event the guest won, the guest would get their details engraved on the trophy but the trophy would remain in either Geoff’s or my possession.

The first competition took place in April 2011 at Turangi. Geoff was the inaugural winner with 3780 points.

With Geoff living in Amberley and me being based at Hyams Beach, NSW, Australia (and at Raglan as often as possible) we have been a bit slack in getting together for a fish. The trophy has only been competed for 6 times since inception.

Our last competition was in August 2016 at Turangi and I am proud to say that I won with 10,600 points. Of the 6 tournaments, Geoff has won twice and I have won 4 times.

Winner or Runner Up … no one ever loses when you have the opportunity to loiter in some of NZ’s most spectacular places.

The Kotare Trophy in my mind is the ultimate definition of camaraderie.