Indicator nymphing, especially as it is practiced on the Tongariro River in NZ, can be a tricky art to master. Due to the large volume of water typically flowing down the Tongariro, the typical nymph rig for the turbulent, deep runs is a couple of tungsten bead head nymphs suspended below a yarn indicator. Often the tungsten bead head nymph combination is so heavy that it needs to be suspended below a yarn indicator the size of a canary. It is almost got to the point where hard hats, protective glasses and ear plugs are mandatory.

However it doesn’t have to be so. It is possible to use smaller tungsten bead heads if you understand how to select them for maximum effectiveness and if the regulations were altered to allow the use of indicators made from materials other than yarn then it is possible to use a much smaller indicator to suspend the nymphs (more about this later).

The selection of tungsten bead heads to suit changing flow conditions is covered extensively in the Active Angling article on the sink rates of flies tied with various beads and is worth reading:- http://activeanglingnz.com/2015/10/15/sink-rates-of-flies-tied-with-tungsten-and-brass-beads/

Many people struggle to master the art of fishing with heavy nymphs and often once they do get the hang of it they do not alter the successful set up to suit changing conditions. The really successful nymph fishermen watch their indicators constantly and, based on what the indicator is doing, they continuously tweak trace length and weight to optimize nymph drift as they move through a run or from pool to pool .

Tony Bishop wrote a couple of excellent pieces on using an indicator when fly fishing with nymphs in “Fishing Smarter for Trout”. Click on the following links to view:-

The key points he makes are:-

“An indicator is a piece of wool yarn, foam plastic float, or small inline float that is connected to the leader or the end of the fly-line. (Check local regulations for permitted indicator materials). Because the nymph is invisible underwater the indicator is used as a visual indication that the nymph has stopped drifting, hopefully because a trout has got it in its mouth.

The indicator also provides a clear visual guide to where the nymph is in relationship to the fish or the lie. An indicator is an invaluable and I think a necessary aid for less experienced fishermen, and if you are new to fly-fishing I urge you to use one. There is a lot going on when fishing quickly moving water and having an indicator to fix your attention on is a great help in placing your nymph where fish are. As skills and experience build, the necessity to use an indicator decreases. However in big rivers trying to nymph fish without an indicator, no matter your skill level, is counter-productive.

The prime consideration when upstream fishing runs is to avoid spooking the fish. The surface water in runs is calmer than in riffles, and deeper. These two factors conspire to make it easier for the fish to spot the angler. The deeper a fish is, the wider its cone of vision (more later).
In addition, the often calmer water surface means that fly fishermen must be more conscious of not allowing too much splash-down when the fly-line or lure hits the water. Great care must be taken when wading – fish can detect pressure waves created by wading.

As in all forms of upstream nymphing, the critical factor is achieving a drag-free drift no matter at what depth the nymph is drifting.
How can you tell if a nymph is being dragged? 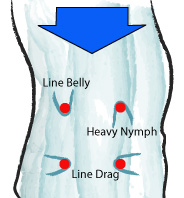 If you are using an [indicator] when fly-fishing or a bubble-float when spin-fishing, watching the water close to the indicator will indicate drag.

If the wake is coming off across the river, then in most cases the line is dragging the nymph. This mostly happens if there is some belly in the line. In some cases you can have a situation where the nymph is in a stronger current than the line or indicator and this will also produce drag.
If you are not using an indicator you need to watch the end of the fly-line – but this does take some experience to become effective.

Sometimes using a large bulky dry fly as an indicator is a better bet than using a traditional indicator. The often bright colours of indicators can put off fish feeding on or just under the surface. Especially when you are using the indicator to control depth as well as indicate, and the indicator is only a short way above the nymph. Foam flies are made for this job.

The ability to analyse rise forms and determine where the fish is taking the fly is a key skill. The Active Angling article on analysing rise forms explains what to look for when the trout are taking sub-surface (http://activeanglingnz.com/2015/09/30/analysing-trout-rise-forms-a-lost-skill/) and armed with this knowledge it should be easier to select a nymph that is holding at the correct depth.

The other thing that Tony Bishop has written extensively about is striking a fish when using an indicator. Here’s what he has to say on that:-

“There are two questions to consider when striking at a fish if the indicator ducks and dives.

Based purely on my own fishing experience, and observation of many hundreds of other fishermen, I believe that in faster moving water, striking at a small movement of the indicator will do little to increase your chances of gaining a hook-up. Here’s why.

Trout feed on free-drifting nymphs by approaching the prey, opening their mouths and at the same time flaring their gills, ‘vacuuming’ the nymph into their mouth. The nymph is then pressed by the tongue onto the roof of the mouth, and if it is felt to be suitable to eat it is swallowed, if not it is ejected. This happens very quickly – literally in the blink of an eye.

Most modern hooks, especially chemically or laser sharpened hooks, are very sharp. ‘Sticky sharp’ is a lovely American term. It means the hooks are so sharp they ‘stick’ to anything they touch. If the hook point touches any part of the trout’s mouth it will ‘stick’. Even on a big size six hook, the hook has to move less than 2 mm to sink it over the barb. When a fish engulfs a nymph, that hook is already moving towards the back of the fish’s mouth – the line pulled by the current continues to pull the hook backwards.

Most often, by the time an angler ‘strikes’ at the drop of an indicator in fast moving water the fish is either hooked already, or it is not. Nothing the angler does will make any difference. 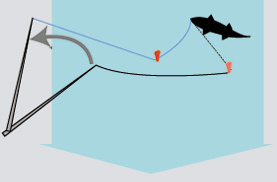 In my view, the angler can do little to make any difference to the initial pricking of the hook. In fact ‘striking’ by lifting the rod tip up in the air when an indicator moves usually achieves nothing at the nymph end. Too often all it does is lift slack line off the water. (As shown in diagram above).

Consider this. Let’s say you are using three metres of leader, and you are eight to 10 metres from the indicator. To get any pull at all on the hook, you have to first pull out the bend caused by the nymph being at right angles to the indicator, then pull out any slack on the water. That can be as much as nine metres, and your rod is only three metres long.

The best technique is to pull the rod through a low arc, with the rod tip near the water. Even if there is slack in the line the water itself will maintain line pressure. (As in diagram above). This uses the friction of the water and the current to pull on the line and transmit the pull more directly and firmly to the hook to achieve a good strong hook-set.

Once that hook-set has been achieved then the anglers full concentration can be placed on either stripping in loose line, or (and preferably) getting the loose line onto the reel as quickly as possible.

Actually I believe striking the fish with the rod tip low to the water is the best method in all fishing situations except when the line (fly-line and leader) is straight and tight to the fly”.

A couple of years ago Adam Royter wrote an excellent article entitled “Pimps, Floats and Bobbers” in the Fly Life Australia and New Zealand magazine (Number 72, Winter 2013, Pages 14 – 18). This looked at the various types of indicators available, what they were made of and what the benefits of each type were.

For me the key thing that Adam did in the piece was take a photograph the various indicator types in a glass container suspending a fixed weight of split shot. This elegantly simple photograph is reproduced below.

This clearly shows that indicators of roughly the same size are not created equal and that some, especially the Thingamabobber on the left, have much greater buoyancy and thus a greater ability to suspend nymphs. Obviously it would be prudent to use the smallest, most buoyant indicator possible as this is going to be less obvious to the trout.

If nymph fishermen are allowed by legislation to use tungsten bead head nymphs and unlimited split shot then it seems nonsensical to limit the type of indicator to yarn when a tiny indicator, such as a Thingamabobber, would do a much better job and be easier for anglers to use. In the central North Island of New Zealand non-yarn indicators are prohibited which means that fishermen can struggle to nymph fish deep pools effectively with heavy nymphs. If the legislation was originally drafted to prevent float fishing using large polystyrene indicators then the simple solution would be to limit the indicator size based on buoyancy rather than composition.  Maybe the companies selling non-yarn indicators should band together and lobby to get this legislation changed?

Previous StoryPaul’s Story
Next StoryNews from the Deep South