(Thank you to Tony for his popular web site which TRM should quote from far more often to improve our ratings….

I didn’t really pinch it.  I emailed Tony to ask if he had any objection.  I also added that if he did object then we would post it anyway as it is such a good reminder – compulsory study…)

Trout Dying To Get a Good Photo

We all should know the rules for releasing a trout with the best chance of survival, but there is one rule that is almost never included in articles about a successful release.

So, you have landed the fish as quickly as possible to limit capture stress and you are about to pick up the fish and a get a few ‘grip and grin’ shots before release.

But, grip and grin, can all too often turn into grip and kill, and it can depend on where and how you grip the trout that can determine its chances of survival. 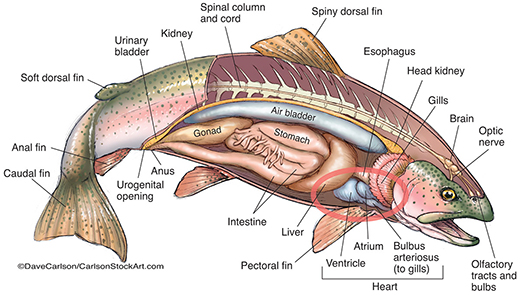 Have look at the anatomical drawing above showing the main internal structure and components of a trout. Take particular notice where the heart is (red outline) – between and under the gills and liver, just above the Pectoral fins.

These three organs, heart, gills and liver are very susceptible to damage, although not always immediately obvious, unless the damage is very severe leading to immediate death.

A fish subjected to external pressure to the heart and other organs may swim away on release, but many die soon after.

Gripping a fish in the pectoral area using inward force and squeezing pressure will compress the heart and maybe the liver and gills. The outcome for the fish is not going to be good, even if it does manage to swim away on release.

So we should have a look at a gallery of grip and kill photos copied from the web and magazines – any ID of the person holding the fish has been removed. I should also note that none, some or even all of these fish were not released – I could not tell.

Those who follow UK trout fishing magazines and websites may have noticed the prevalence of photos with the trout being held as seen in the photo above. I did a quick flick through a pile of recent top selling UK magazines and websites and as rough estimate well over 70% of fish are held by what I call the ‘UK grip’. I believe trout are held this way to show off the fact that the fish is a ‘full-finned’ or a wild fish, not a stocked fish.

Most fly-fishing in the UK is done in stocked still-waters. Many (most?) stocked fish have their tails and fines damaged by other fish and the concrete walls of the stock pens. So to show off the fact the fish is ‘full-finned and tailed’ you need a grip that does just that.

That grip, which I have called the ‘UK grip’, is great for showing un-damaged fins and tails, but is it good for the trout? No!

But this bad grip is certainly not confined to the UK, you see grip and kill photos from around the  world on the net, but it seems to be a more common practice in the UK.

This practice needs to stop. Magazines and websites need to stop showing photographs of fish held in this damaging way.

The way it should be… 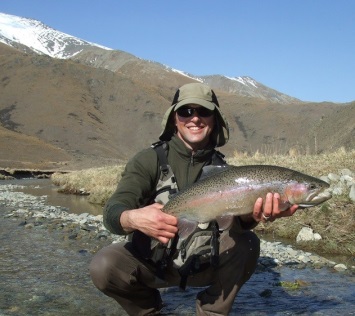 The right way to hold a fish near the head. The trout is ‘cradled’ with the fingers parallel to the side of the fish, not clawing in like talons, or squeezing this vulnerable area.

Note that the angler is squatting down in the water so the trout is near the water, and can be easily dipped in the water, between shots – although the best possible practice is to limit shots to as close to one as possible.

The key to being able to get a good non-squeeze grip on the pectoral area is a good grip on the tail.

One of New Zealand’s best known guides, Tony Entwhistle, writing in the New Zealand Fish & Game Magazine, (published here by permission) has one of the best descriptions I have read on the proper handling of a trout.

Securely handling trout without causing stress or damage is a matter of a gentle touch, not a tight grip.

To pacify a landed trout, simply place a hand vertically in front of its nose to prevent it from swimming forward and fold the palm to cover both eyes. This acts as a mask and immediately calms it down. Trout relax quickly when their eyes are covered.

Next grasp the fish’s tail with the other hand, without excessive force.

Some anglers use a piece of stocking for grip, but with good technique this isn’t necessary. Securing a trout needs only gentle pressure between the thumb and forefinger, applied directly over the base of the tail, applied where it joins the body (hypural joint).

Apply pressure top and bottom through the first joints of the forefinger and thumb, rather than along the sides

The mistake is grasping the tail too far forward and using too much hand in doing so. Squeezing hard does not help as the fish slips more easily.

Now test the grip by lifting the fish slightly by the tail, keeping the other hand over the eyes for the moment. If the grip is secure the trout will not slip, but if it does resist grabbing at it with both hands. By quickly slipping a hand in front of the nose, and covering the eyes again, a lot more fish will be saved from premature release.

With a positive grip on the tail it is now possible to begin lifting the trout safely for a photograph or release.

Avoid squeezing the fish around the soft belly area behind the pectoral fins because this causes discomfort and can potentially cause serious damage to internal organs.

Instead slide the free hand under the pectoral fins, orientating the hand so that the trout’s head rests along the index finger, with the pectoral fins spread out between thumb and little finger.

The trout will be nicely balanced and the soft tissue in the belly area will no be supporting any weight. Lifting the trout this way, and returning it to the water between photographs minimizes any distress which could reignite its struggles. Turn the fish belly up when removing the hook.

Handle trout gently and with respect and they won’t panic or stress, ensuring their revival for release without damage and a minimum of fuss.”

The Harsh Fact About Holding a Trout
Out of The Water

There is no getting around it, lifting a trout out of the water to take a photo is almost certainly going to dramatically increase the stress and physical damage already done while landing the fish.

This is true, even when the fish is handled very carefully and all the “rules” about releasing are followed to the letter.

If you are really concerned about releasing a trout with the maximum chances of survival never lift it clear of the water.

(Recent research (report to follow) suggests after playing and landing, holding a fish out of water after landing it, for 30 seconds reduces the chance of survival by 30%, and 60 seconds out of the water reduces survival by 70%.)

To get the full picture on releasing trout, and other fish, fresh and salt water  with the highest chances of healthy survival see this, it spawned the grip and kill article above.

Doubters Strike Back at Grip and Kill

The Grip and Kill (GAK) article received a huge amount of support from the fishing community. Links to the article reached many hundreds and is still growing. Many out-takes from the article were, and are still, being published by a large number of sites, big and small. The article has been published, (by permission), in a great many fishing club newsletters, etc.

The GAK page blew my site bandwidth cap out the window, and if it was not for a friend in the business mirroring the page, I would have had to shut the site down for a while. Even today, the page receives over 200 – 250 unique visits, every day.

But of course, being on the Internet, GAK attracted a significant group of nay-sayers and doubters.

There were two main points of dissension

1. The reason I did not quote scientific evidence, was simple – I could not, and cannot, find any.

My article is based on 50 years fishing observation, experience and conversations with a good many very experienced and well-known guides.

All of us have observed dead trout lying in the shallows of a river or lake with no outwardly visible signs of wound or damage. All of us have watched as ourselves, clients, fishing mates, and other anglers released a fish which swam away apparently un-injured, only to turn over on its side and sink to the bottom minutes later.

But this is just ‘anecdotal evidence’ as the boffins would say, and promptly ignore it.

So I devised an ‘experiment’ you can try yourself that only takes a few seconds. It can immediately reveal just how damaging squeezing a trout with fingers bent, near the pectoral area, can be. 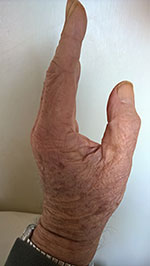 The correct grip to avoid ‘grip and kill’ – fingers straight up the side of the fish. 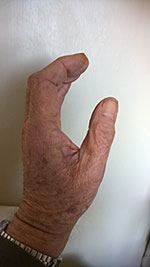 The wrong way to hold a fish – note the fingers ‘clawed in’ cutting distance between thumb and fingers by about half. not good.

One time when the ‘claw grip’ is most damaging, is when the fish squirms and bucks, and the angler squeezes down hard to maintain a grip. A bad outcome is likely.

2. Just because a trout swims away freely on release does not mean all is well.

All of us who have, or still, hunt know that a wounded animal can flee from where it was shot, but still die hours, sometimes many hours, later.

Those of us who have played a contact sport, (mine was Rugby in the front-row) will know that many injuries are not readily apparent in the ‘heat of battle’, but very apparent the next day.

Trouble is, unless the damage to a trout is obvious, such as bleeding from the gills, knowing whether the fish is ‘wounded or not is difficult.

Sometimes it is fairly obvious that the trout is in trouble. Fish that take several minutes to ‘revive’ and finally swim away may well be unlikely to survive.

(Recent research (report to follow) suggests after playing and landing, holding a fish out of water after landing it, for 30 seconds reduces the chance of survival by 30%, and 60 seconds out of the water reduces survival by 70%.)

So we are left with the fact that one important way to help ensure a successful catch and release, is to avoid squeezing a trout, especially around the pectoral fin area. Indeed, in my opinion squeezing a trout anywhere is not going to be good for it.