I’ll bet these spooked the trout for a little while…  Often we enjoy a productive period when all inmates are fishing well and bringing back trout for smoking and all the planets are in line and then for no apparent reason the river activity goes all quiet.  When this happens – like on 18 & 19 September recently, I suggested to fishos that there might be a swarm of earthquakes passing through.  It is always the perfect excuse for us.  But they do not realise we often have hard evidence they are unaware of, although it is no use showing them or explaining to them – they never believe SWMBO.

During these minor ‘swarms’ we mortals cannot feel the little tremors but the trout have far more sensitive ‘feelings’ along their lateral line.  Then they get spooked and will not bite at anything until after the earthquakes have stopped.  That happened this week.

Below is ‘official’ confirmation from Geonet.  But first is TRM’s visual evidence of what these little swarms can do at TRM… a much more cost effective and very accurate analytical test.

(Some viewers with a delicate composition may prefer to look away as it is messy.)  Being trout anglers many are naturally cautious by nature and may not believe us at times – but now we have proof.  Real indisputable Piwakawaka (a Maori word for fantail – TRM are trying to be PC before we get attacked again for anti-iwi language – their spies are watching us) hard evidence!

I am surprised Geonet does not rely on TRM’s unscientific test system more often…  We call it the fantail test.  Previously regular readers might remember images of fantails that are trained for housekeeping duties at TRM.  See image at top.  They flutter into the tight corners up in the rafters that cannot be reached and remove all the tiny spiders.  They are very welcome and perch on their elevated swing (aka light cord) chattering away to keep me company for hours.  OK?  Well look what they left behind on the lamp shade after the recent swarm of earthquakes.  Convinced? 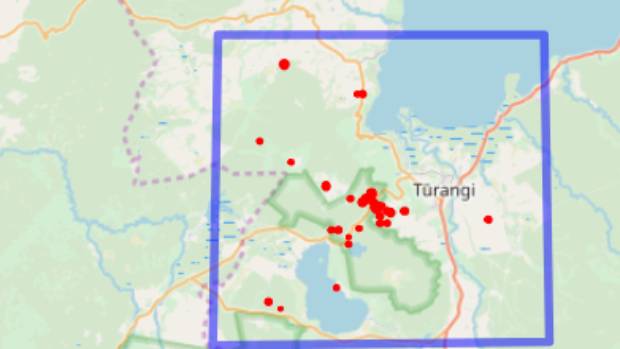 A map showing the locations of the swarm of quakes that occurred near Lake Taupo.

A swarm of 28 earthquakes has struck the country – and they all occurred in an area relating to volcanoes, faultlines and geothermal activity.

GeoNet’s seismometer network recorded the swarm of quakes between Turangi and Lake Rotoaira, near the volcanic Lake Taupō, over the past week.

If you’re wondering why you didn’t feel them or haven’t heard of them, that’s because they ranged in magnitude from M0.4 to 2.2 – and in depth from 5-10 km.

The earthquakes were too small to be widely felt – the largest event in the swarm was reported as felt by only 13 people – or to cause any damage.

GeoNet said: “Earthquake swarms are characterised as a cluster of similar-sized earthquakes, close together in time and location, usually with no one main or large event.” 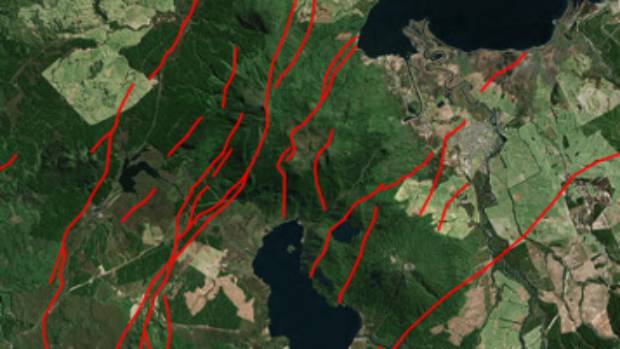 There are a number of fault lines in the area near Turangi and Lake Rotoaira, shown here in red.

GNS volcanologist Brad Scott said: “Earthquake swarms are common in an environment like NZ, more so in the Taupō Volcanic Zone (TVZ). The thing about swarms is how irregular they are.

“Some, like this one, lasted a couple of days. Others have lasted for years.”

Quakes involved in swarms were often small – between M2 and M3 – but it was possible to get larger ones, and New Zealand has experienced clusters of quakes over M4.

“The usual cause is the prolonged ground deformation which can be driven by faulting process, they can also be driven by volcanic and geothermal processes. In some cases it can be a combination of the processes,”  Scott said.

In the latest swarm, the largest quake happened near the start, on September 18, and was followed by 10 smaller earthquakes that were more typical of a mainshock-aftershock sequence, according to GeoNet.

“Then about 24 hours later, on September 19, a further sequence occurred with the largest earthquake towards the end.”

SHOULD YOU BE WORRIED?

Not in this case – the biggest quake in the swarm was only M2.2 and it was only felt by 13 people.

In general, swarm quake strength is also low – generally between M2 and M3.

Earthquake swarms are common in the area as the Turangi-Rotoaira area formed the southern portion of the Taupo Fault Belt, a zone of faulting within the TVZ.

The area is one of crustal extension, where the TVZ is getting wider.

Crustal extension is deformation of the earth’s crust caused by movement of tectonic plates at their edges.

In the TVZ, the crust is being pulled apart at about 10 millimetres per year.

Recent examples of earthquake swarms include a cluster around Seddon in May, which began with an M3.8 quake.

Another swarm in late October 2017 centred around White Island, off the coast of the Bay of Plenty, including an M4.8 quake.

While they took place, GNS Science said they were more likely part of normal earthquake activity around the island than related to the volcano on it.