Tongariro memories today from one of TRM’s most regular BOF’s (Boring Old Farts).  Murray had been a regular visitor here before SWMBO’s reign.  He is one of the inmates that this series was aimed at as he has fished all over the world wearing his favourite hat (?) but still keeps returning to the Tongariro. We blamed Kiki… 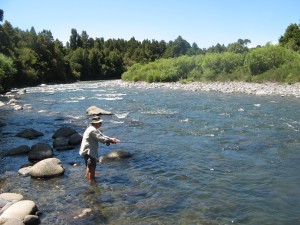 I’m Murray Cullen, Kiwi born but I have lived in Australia for 48 years. I come from Ballina in Northern New South Wales, close to being the most Easterly part of Australia and so the nearest place to New Zealand from the West Island.

Next year I hit the young age of 70. I retired 4 years ago after being a Senior Lecturer at Southern Cross University so I could continue my fishing life.

I was a keen salt water angler and can still remember surf casting to catch snapper from the beach at Mt Maunganui in the 1950’s and 60’s, but took up fly fishing in 1998. After some minor success in Australia I had to challenge myself by fishing the Tongariro River the same year.

This was the same year I first started staying at the Tongariro River Motel when Derrick was the manager. I got some advice from the staff at Sporting Life who suggested using a Woolly Bugger in the Major Jones Pool. After about 10 casts I had my bag limit and thought ‘How easy is this?’. Seventeen years later I’m still finding it not very easy at all!

Since then I’ve been returning at least once a year and sometimes three times a year. Having relatives in NZ to visit also encouraged me. 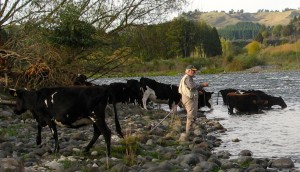 I keep coming back because of the ease of fishing and the challenge of fishing the Tongariro. It’s easy because of access, being handy to the town, roads etc, and the riverside tracks (thank you DOC).

(Compare the cows on the Wanganui…)

The challenge is there because of finding a pool that hasn’t been thrashed (Bridge Pool), and the changes in the river conditions. The clear low flows of summer are so different to the winter flows and the flows after floods.

My favourite pool is the Hydro pool where I’ve probably had my most success, including my one and only brown trout.

The Duchess Pool is another favourite (see TRM slide show below on Duchess Pool) but with increasing age and wobbly knees the walk in and the stones are taking their toll. The same can be said of the Cicada Pool.

The Plank Pool was another pool often visited until Waikato Regional Council decided to alter the river flows and turned it into a shallow stagnant pond. 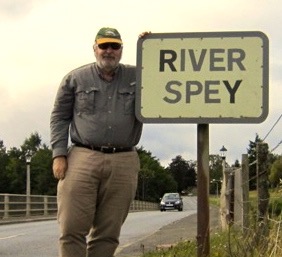 I don’t have many forgettable moments, but a couple of times when the catch rate is very low I like to forget. Twice I’ve fallen in, but luckily during summer fishing when not weighed down with waders, and only in the shallows.

Some unforgettable moments include the first time I fished the Tongariro.

I also had a great day with Guide Kiki when we rode the Tongariro River Trail and took photos and filmed the exploits for one of the TRM videos.

I can also remember hooking and playing a very large fish in the Upper Birches Pool. I played the fish for about 15-20 minutes and finally got it into the beach. Then, as I reached down to grab it, it rolled, freed itself and was gone.

An angler from TALTAC actually photographed me playing the fish and sent me the photos later. It’s funny how you can remember the big fish that get away.

My largest fish was a 5-6lb brown trout, but a couple of years ago I had a lot of fun with a 2-weight rod and line chasing the “sardines” in summer on a dry fly. Those little fish can give you a great workout on light lines. 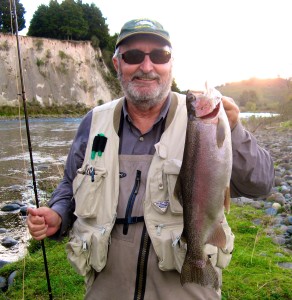 I mostly fish both wet line and nymphs, especially in the winter runs, but dry (cicada) and dropper are great in summer.

Skating a dry fly across the Hydro Pool at dusk in summer can also be a lot of fun.

Luckily I have had a chance to compare the Tongariro River with some other places including the Spey River in Scotland.

I did catch a trout there on a spinner back in 1978 but when I visited it in 2013 the costs to fish were enormous – about NZ$900 for a day including gear hire, licence, permit etc! 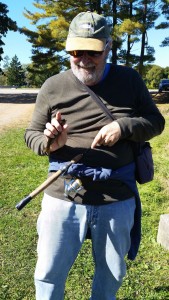 Compare that with NZ$90 for a Taupo licence.

I’ve also been fishing in Pennsylvania USA and managed to catch a 6 inch brown trout.

For the price, scenic value and quality of fishing you can’t beat the Tongariro.

I like fishing the Tongariro River for the reasons listed above but a major factor is the friendships built up while staying with Ross and Pip at the Tongariro River Motel. The warm welcome, the help, the evening drinks, the meals, the ‘Chinese Nights’, the dogs (miss you Boof) all make it memorable.

My favourite fishing trip is…..the next trip I make.

(TRM slide shows below feature Murray fishing the Duchess and co-producing the Tongariro River Trail clip with Kiki.  Murray probably did more with Kiki tutoring her into such an effective popular guide.  And NO, it was not what you were thinking either… Kiki was studying environmental engineering subjects which Murray had already tutored in so they had a strong common interest.)