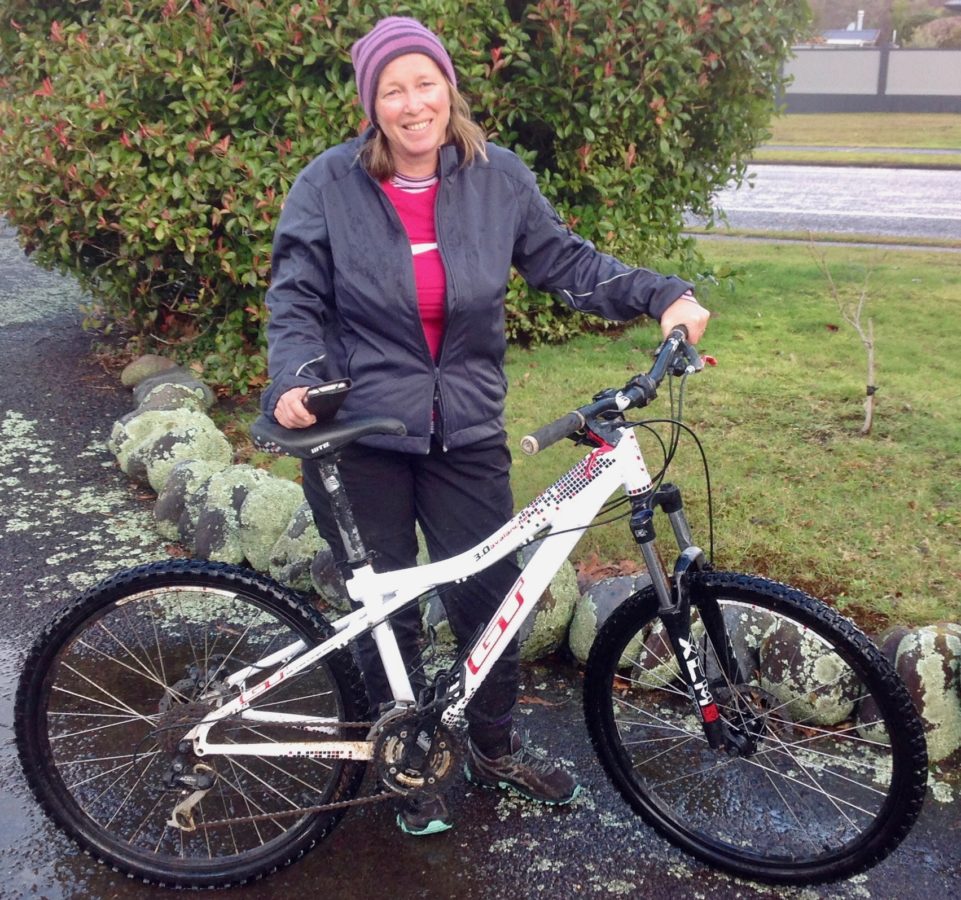 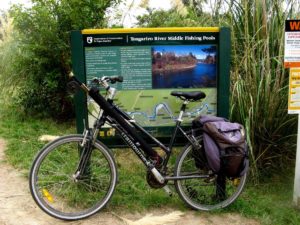 The original trail was built by work gangs from the local Rangipo prison about 90 years ago.  These were originally dug out as anglers’ access tracks along the banks of the mighty Tongariro River.  Prisoners were also used to maintain the trail for many years – and they did a wonderful job.  They did many such community work schemes around this region such as building the original basic accommodation on Kowhai Flat for the Duchess of York in 1927 – (the Queen mother, wife of George 6th,)  near where the Duchess Pool is now located.  To keep the visitors supplied with fresh bread, it was transported by horse-wagon from Waikune Prison which had the nearest bakery.  These buildings were then transported to be converted into the Government trout hatchery near the Birch Pool which formed the nucleus of the Trout Centre which was an anglers camp back then. 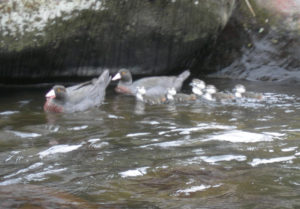 Until the 1920’s only the pools below the road bridge were fished intensively.  Above the bridge any access was too difficult.  The American author, Zane Grey, first made the upper river so popular in 1926 when he was taken by his guide Hoka Downs, upriver to fish the Dreadnought Pool.  He was so impressed he tried to buy the river when he returned in 1932.  On a tourist map of 1929 the only pools named were Major Jones Pool, the Hatchery, the Duke’s camp, the Tawaka Pool (Red Hut?) and the Dreadnought Pool.  Staying in the fishing camp on the site of the hatchery had certain privileges; each morning a pool was allocated to one angler who changed his pool with someone else at mid-day.  On the 1928 map of the anglers camp is the Sly Grog Pool – its close proximity to the anglers’ camp was significant in the prohibition era.  These pools enjoyed so much interesting history – but I digress…  Back to 2017… 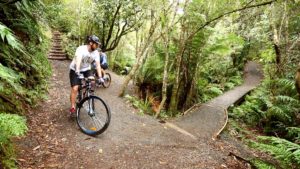 To form the bike loop, all the Tongariro River Trail needed was to link up various parts to become the success enjoyed by so many today – shared by tourists, anglers, walkers as well as bikers.  It is such an easy and attractive track for all ages with several track options between the swing bridges and road bridge over the Tongariro River.  A feature is the constantly changing environment varying from natural riverside habitat to intensive fern glens to mature native bush to conifer plantations to farm land to landscaped reserve along the river bank.  The well drained pumice base makes it accessible in all weather.

The original scheme in 2010 was for a three day trail extending much further south up the Tongariro River linking other trails extending through the Kaimanawas.  These would have provided even more circuit options but have never been completed – apart from the 7 km trail between the Pillars of Hercules to Tree Trunk Gorge.   The three stages were from Turangi to Poutu Dam, then a loop up to Tree Trunk Gorge returning on the opposite side, then back to Turangi on the opposite side.  It would have been so popular and spectacular.  Unfortunately it was postponed until the local Waitangi settlement was signed off in respect of the prison property.  Now that has been done it is only a matter of time before these extentions to the existing Tongariro River Trail commence. 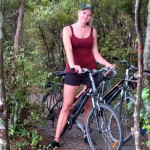 The Tongariro River Trail provides a choice of circuits which is so important for planning.  This allows bikers (and walkers and anglers) to leave their car on whichever car park they choose and return without going over the same track.  Much better than any other bike trails in this region, none of which are loop tracks.  Whilst there are so many wonderful bike trails such as the easy tourist tracks such as Lions Walk, Rotary Ride, Waikato River Trails, Craters of the Moon, Timber trail, Great Lake Trail (W2K, K2K), or more difficult technical rides like 42nd Traverse, Tree Trunk Gorge, Waihaha Trail, none are loop tracks.  They all involve ‘there and back’ rides or planning is necessary to leave one vehicle at the start and another at the finish or arranging pick up by boat or shuttle service.  For tourists that is so inconvenient. 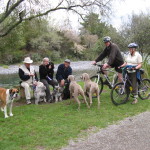 Then there are the other attractions like the stop off at the Trout Centre for something entirely different, or starting from the more southern end at Red Hut Bridge so you can enjoy a coffee or lunch break at any of about eight cafes at the Turangi end.  There are also interesting side-tracks off to some very pretty secluded pools for summer picnics.  The views over the Tongariro River vary from being close ups beside the pools (fly fishermen provide endless entertainment) – look out for the Blue Ducks – to elevated views over a km or more of the river and beyond over Lake Taupo in the distance – these are what tourists look for. 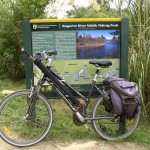 In summary it ticks all the boxes for a perfect tourist bike trail.  But after five years it is so sad that it has not been extended further north or south.  Many bikers like Sarah are waiting…  So here is the last interesting statistic that has emerged from the NZ Government sponsored bike trails.  These bike trails return to the local community on average $3.50 p.a. for every $1 spent on their construction.  So they are more than just bike trails.  They are such a sensible investment in the local community that Turangi cannot afford to be without.  Could someone please tell the council.  The completion of the trails to Tree Trunk Gorge in the south and to link with the Great Lake Walkway (Lions Walk from Taupo to Waitahanui) in the north would result in an economic boom for Turangi and all the little settlements on the eastern side of Lake Taupo..

The Taupo to Turangi (T2T) bike trail feasibility report prepared about a year ago made it unaffordable.  It was quite misleading and ridiculously expensive at $18.3 Million due to their specification for a 2.5 metre wide board-walk most of the way.  A realistic tourist trail would cost $6M.  They could save $2M in the first four km from Turangi by using existing tracks instead of their board-walk version.  Tourist bikers have been asking what has happened since?  It needs leadership away from Council’s bureacracy.  Everyone is waiting…  Watch this space.  It will happen.  The only question is when? 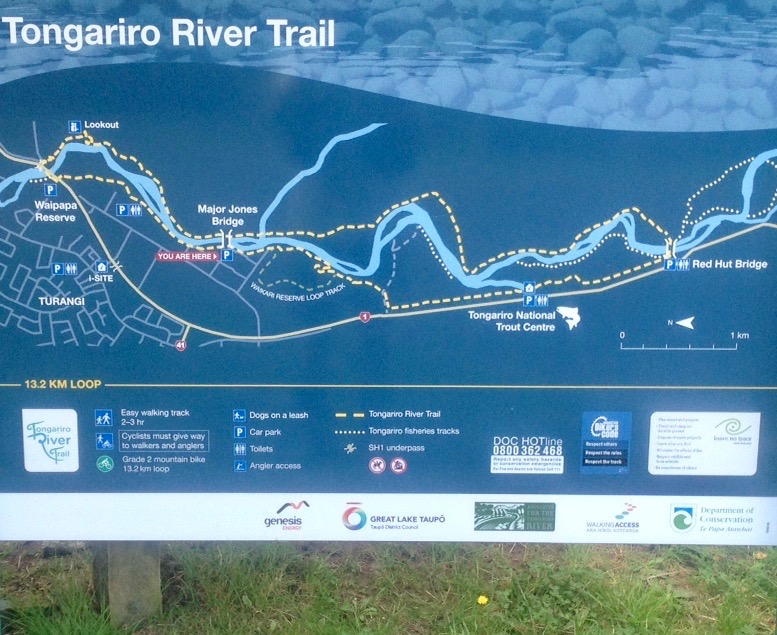 Tree Trunk Gorge trail is a beautiful undulating 12km (out-and-back) ride among stands of native red beech trees on the lower reaches of the Kaimanawa Ranges in Kaimanawa Forest Park. The track can be ridden as an out-and-back trail, or as a point-to-point starting at Tree Trunk Gorge Road near State Highway 1 and finishing at Urchin Camping Area off Kaimanawa Road.

For a return trip on this trail allow 2-4 hours to complete it. The riding is Grade 4 – the terrain will suit those with good mountain biking skills and a reasonable level of fitness.

Be prepared for an adventure, so make sure you take the necessary items (spare tubes, pump, food, clothing etc) and treat this ride with the respect it deserves. There will be river crossings, steep rutted hill climbs and the terrain can be rocky in places. There is limited cellphone coverage on the trail.