Image on right of a typical suspicious un-named rogue “cowboy operator” guiding Dee Taylor from Hamilton – sneaking around the Tongariro using the cover of darkness to hide their activities.
Will this become illegal?

Below on right is another top local professional fishing guide, Kenny Drummond, with a happy younger client.
NZFishing.com is looking for feedback on this “cowboy guiding” issue.  Don’t hold back.
Contact Doug Stevens to say what you really think…  Images below – of guides at work on the Tongariro – are from TRM library.

It is only a matter of time before somebody is injured or killed on a fishing trip organised by a cowboy operator, fishing guides say.

Doug Davison from West Island enjoying being guided on Lake Otamangakau in 2011.

The Professional Fishing Guides Association estimates less than half of the 400-plus guides now working in the country have health and safety plans or are even paying tax.

The group said rogue guides were putting the country’s reputation as a great place to fish for trout and salmon at risk.

Spokesperson Craig Smith said it was only a matter of time before a client being led by a rogue operator was badly injured or killed.

“[Guides are] not going to tell you they’re playing outside the rule book and so you can find yourself in a situation – and we’ve got evidence of this – of guides that aren’t in our association and very near misses in the outdoors.”

Most illegal guides were coming from overseas and working under the radar by telling Immigration New Zealand they were only here as tourists, he said.

“A lot of people hide behind the fact of saying we’re not actually taking people fishing, we’re just going for a walk along the river with them and it’s very hard to prove – but we know they are getting reward for what they are doing.”

Rising numbers brought an increased risk of something going wrong and meant there was a real urgency to tighten rules, he said.

The agency responsible for deciding whether a guiding license was needed was Fish and Game.  (TRM inmates have asked who would police this in the Taupo region managed by Department of Conservation?)

“I’m guided by my council, so when my council comes out with a conclusion then I’ll do what my council want me to do. So I’m completely neutral on it.”

Above on right is NZ’s most experienced guide Frank Harwood with another big brown from the lower Tongariro.

A decision on whether to bring in a licence would be made within the next six months, he said.

Images of a “professional” Taupo fishing guide (name withheld) escorting his clients back across the upper Tongariro River.  But this cannot be considered dangerous if he is licensed?   What baloney!

Below is another rogue cowboy operator from West Island – Trev – caught on the Tongariro… Un-registerd, un-licensed, un-taxed, unconcerned… 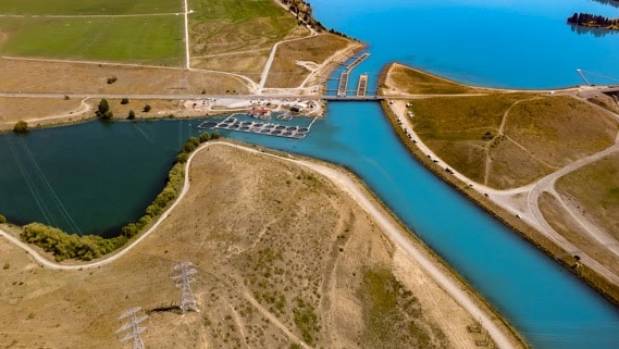 A birds-eye view of anglers at the Ohau canal near the High Country Salmon farm.

A 27-year-old Cromwell angler has paid a hefty price for flouting fishing laws.

Judge Michael Turner fined McKinlay $750 for obstructing a warranted Fish and Game officer, $300 for fishing without a sports fishing licence and $300 for using more than one fishing rod and running line. He was also ordered to pay $130 court costs and $350 solicitor’s costs.

At 11.55am McKinlay was fishing in the canal with a female companion when he was approached by a Fish and Game ranger who was undertaking licence checks. McKinlay admitted he did not have a licence and he was then told it was an offence to fish without one, and an offence to fish with more than one rod. When the ranger attempted to read McKinlay his rights he went on a “tirade”.

McKinlay then drove away sticking his finger up at the ranger.

“Fish and Game rangers don’t have the power to detain individuals,” Checketts said.

Duty solicitor Tanya Surrey said McKinlay did not have an explanation for his actions.

“He just snapped in the heat of the moment and felt a little bit agitated in light of the ranger approaching him.”

Judge Turner said McKinlay had lost his composure when he was caught out, and went on a tirade of abuse when the ranger was carrying out his statutory function.

He offered McKinlay the chance to explain himself, to which McKinlay responded “no”.

“If you had I was going to take some money off your fine.”

“Compliance work is often conducted in remote areas and the likelihood of detecting offences is relatively low. This means that those offenders which are convicted of obstruction, fishing without a licence and fishing contrary to the regulations should bear the burden of passing the message onto others by way of a deterrent sentence.

“The costs associated with the council training, operating and maintaining sufficient compliance capacity and conducting prosecutions for angling offences adds further cost to anglers who honour their statutory obligation to purchase a fishing licence.”

The council was charged under the Conservation Act to maintain and enhance the sports fishery within the Central South Island Region.

“The council does not receive any government funding to carry out this work. The council’s principal source of revenue is the sale of fishing licences. The council is reliant on high compliance levels to keep the cost of a fishing licence at a level that makes the sport accessible to all New Zealanders.

“Everyone fishing for sports fish, which includes trout and salmon, is required under the Conservation Act to purchase a fishing licence.”