Following another alarming report yesterday of anglers almost trapped on the Island Pool when – due to Genesis closing off the Rotoaira canal –  the river rapidly rose last Wednesday, the following is a repeat of a 2016 TRM report which continues with previous dangerous life threatening flooding problems and precedents of the same issue in previous years, followed by a wonderful solution of how Genesis could win back some brownie points and goodwill in Turangi.  This is a lengthy post of previous reports to provide a complete picture, so you might like to make a cup of tea first…

(continued – thank you to readers for all the feedback and support!)

Following TRM’s report in 2016, Genesis contacted us to advise the wet weather was to blame for the flash flood on Saturday – not them?.

The Rotoaira canal was closed off when the flow reached 160 cumecs.  A similar ‘spike’ of high rainfall was evident further up river.  They were very disappointed that TRM prepared the report allegations without checking with them first – a bit awkward on a Sunday.  They advise they will respond with a full explanation to try to convince conspiracy theorists – like SWMBO…

As reported in TRM blog yesterday, anglers claimed Genesis owes the Turangi/Tongariro region ‘big time’ for the environmental damage as the once mighty Tongariro was strangled to divert flow to spin Genesis turbines for profit.  Anglers suggested to TRM it is now pay-back time…

The environmental issues has been compounded since by flash floods after rain, increased by them shutting off the Rotoaira canal and possibly risking lives – see yesterday’s report for anglers complaints.  Whenever the suspended muck – sand, pumice, toxic ash, ‘run-off’ debris etc. in the Tongariro River gets too dense when a flood reaches 160 cumecs, when their hydro turbines could be at risk, they close off the canal at the risk of anglers lives instead.

This has happened time and time again, year after year for the last forty years.  Add to that the additional community costs of flood protection stop banks as the lower Tongariro River bed is raised by aggradation as the minimum flow was inadequate to carry all the sediment out to the delta.  Now even TRM have to pay increased rates and insurance as after being here for over fifty years the Council have decided we are located in a flood hazard zone – all due to the hydro power project.  But I digress…

Genesis claim they have that right to do whatever…  They might have been able to develop dams down the Waikato River without worrying about environmental damage or trout ladders etc. 40-50 years ago during the ‘Muldoon Think Big’ era, but in this new enlightened century their corporate policy is obsolete.  They are now accountable. 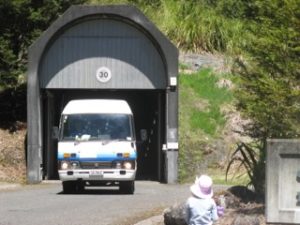 Yesterday, rightly or wrongly (? – you can decide) TRM slam dunked GENESIS for the flash flooding on the Tongariro.  Anglers were spread throughout the pools and unaware of the dangers.  The same risks for human safety are common on the Whakapapa River for the same reasons.  For locals and anglers, this situation is not acceptable any longer.

Previously Genesis earned public goodwill by donating to many worthwhile local community projects such as the Trout Centre, swimming pool complex, etc.  Now Genesis have sold off half (49%) of their shares to the public, so many such subsidies have been reduced or eliminated.

In this new age of more sensitive enlightenment those extremes of corporate entities doing whatever they like to the environment, in the name of ‘progress’ (?) have gone.  (A recent example was the Carp Farm fiasco in Taupo)  Why?

This is largely due to much improved public awareness and greatly improved communications via social media outlets exposing any abuses, such as the one you are reading and through publications such as ‘Fishing & Outdoors’ newspapers.  Wonderful stuff…

To compensate the community with a viable solution, but which does not cost Genesis, (as we understand their motives for profit must come first) in Turangi we have discovered the perfect solution.  The conceptual basis for this to be of mutual benefit is so simple and obvious to everyone in Turangi, except Genesis. 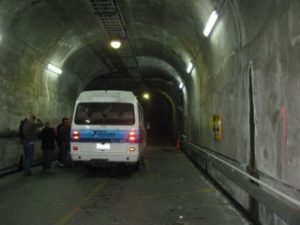 So on behalf of so many locals and tourists we request Genesis to open up ‘our’ underground power station for public tourist viewing and all will be forgiven.  OK?  Everything is already there, it will not cost Genesis a cent, and Turangi will be forever grateful.  We have been asking them now for many years to open it up, to no avail.

Turangi has only one major industry – tourism – and needs to use every tourist opportunity locally, in the struggle for economic survival.  For years we have continually heard of rumours to open up the Underground Power Station for tourists visits but it has never happened.  That is apart from the odd one day a few years ago during the Turangi ‘Autumn Festival’ when it was always booked out.  At TRM we continually receive tourist enquiries as well.

The photos by SWMBO are from one of their few open days.

In their last communication – when TRM emailed Genesis on 8 October 2015 – they replied as follows:

TRM Question:  ‘Can you explain why Genesis have not allowed tourists trips to your underground power station? Turangi is desperate to develop more tourist opportunities. The Manapouri Power Station visit is one of the best attractions at Te Anau.  So why not in Turangi?’

Genesis Answer:  “We are in the business of running and maintaining power schemes. Due to limited staff numbers and work commitments we are not set up in house to take public tours.
I agree that NZ inc could do well by this type of activity. But we are simply not geared up for this at this point. We may choose to look at options available to us further down the track.”

A very successful underground power station tourism precedent is at Manapouri in the remotest southern location in the South Island.

The response from Manapouri (x Bruce Nicol, Assistant Operations Manager at Te Anau/Manapouri) confirmed Turangi’s lost $$$ tourist opportunity.  i.e. In their summer season of six-seven months in a much more remote location they get about 50,000 tourists each year paying net $20 per person for the power station visit = $1 Million p.a.   (Turangi iSite could benefit with that income…)  In addition they pay Meridian Energy $5 per head = $250,000 p.a.  The full cost to tourists to include the boat trip across the lake is $75/head…  Comparatively, conservatively, the Genesis Underground experience should attract over 100,000 visitors p.a. as it is open all year and has easy access from Turangi.  Do your sums…  $500,000 p.a….

There is another similar successful underground power station precedent in the Snowy Mountain scheme.  Their hydro power scheme took 25 years to build and employed 100,000 to build nine power stations and provided irrigation via 16 dams.  At Tumut No 2 they have underground tourist tours and audio visual displays. 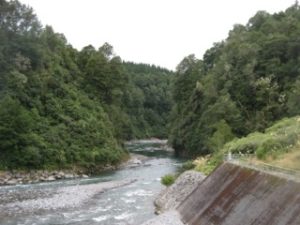 Local Turangi-Tongariro (and Taupo) regional tourism is really neglecting a ‘unique’ opportunity.  This is the only underground power station in the North Island.  As seen in the photos, everything is ready to go, except Genesis…

Compare the very remote location of Manapouri to the Rangipo Power Station – just off SH1 about 25 km from Turangi, then factor in the additional nearby scenic opportunities including the Poutu Dam and the Pillars of Hercules on the upper Tongariro River….  So at Rangipo the potential would be even greater?

Turangi cannot accept their delays any longer.  They continue to procrastinate and just cannot be bothered…  We are advised by locals who worked on the original power scheme that the construction time was extended to provide for the road in to be sealed and a toilet installed to cater for tourists…

As long as Turangi is struggling to find more tourism opportunities, Genesis really have no legitimate excuse.  It is still a mainly public owned facility.  Genesis have a social and moral responsibility and now they have withdrawn their subsides for local community amenities, they still owe the region for the long term environmental damage to the Tongariro River that continues to detrimentally affect tourism.

Their ‘limited staff numbers’ excuse is nonsense.  Other similar bus tours rely on the bus company and driver for everything.  i.e. Manapouri drivers are required to gain an ‘Entry Certificate’ which is a Meridian Energy test for competency, security, safety, and emergency, and all drivers need current first aid certificates.  Turangi shuttle bus drivers already have that.  All tourists need is Genesis access approval.

SWMBO has offered to make it even more attractive for Genesis, indeed, completely irresistible.

In return for total exclusivity and to increase the payout to Genesis by 100% – (i.e. @ $10 per head x 100,000 visitors p.a. = $1 Million p.a.) and take total responsibility for all health and safety and guiding issues.  If Genesis turn that down they will be the only company in NZ to walk away from $1 M p.a. for doing nothing.  Their shareholders would be asking why?.  Quite rightly so!

Early warning – This exclusivity agreement with TRM will require an even more exciting tourist re-branding exercise for the few bored employees at the underground station to appeal to the tourist sector.  They will need to embrace the concept they are now in the tourist industry by discarding their corporate work overalls for more interesting dwarf and orc and hobbit costumes and renaming the underground station as the Giant Cave of Mordor.  It is forecasted this proposal will attract more tourists than Hobbiton.  For their part TRM will have to agree to change their Welcome to Turangi sign to “Welcome to the Cave of Mordor” sign.

Don’t laugh…  SWMBO is always deadly serious when talking about money.  Tourists will be visiting the Cave of Mordor for the next fifty years.

Need proof?  OK then.  Compare a film called The Sound of Music (one of SWMBO’s favourites!) was made over 50 years ago but still attracts tourists to visit Salzburg…

The Lord of the Rings has already proven to generate similar tourist pulling power.  If you doubt this then we challenge you to enjoy getting ripped off at Hobbiton @ $79 per head to admire a few round doors stuck in a hillside.

(Photo on right of wonderful Turangi MP, Louise Upston, inspecting Mordor from the safety of  Pillars of Hercules bridge)

SWMBO’s brilliant Cave of Mordor concept will have more 100% pure sensational natural scenery to make it memorable and unique in the North Island.  Well worth visiting at only $XX (Shuttle bus price is still confidential at this preliminary cost benefit feasibility planning stage).

If you would like to visit the Cave of Mordor then show your support – you will need to take this initiative a little further than just asking Genesis locally and being refused again.

Go over their heads by emailing local Taupo MP Louise Upston (louise.upston@national.org.nz  and cc to TRM) for her to take to the Genesis Board (- chaired by x-PM 1997-1999, Rt Hon Dame Jennifer Shipley…).

That appears the only way we will influence the present local management.  Please forward this report to them all.  Thanking you all in anticipation

Previous StoryMore complaints… Genesis sucks!
Next StoryAnglers ask, where will it end?…