Do you know of anywhere else in the trout fishing world where there is such a variety of interesting and informative and encouraging and usually conflicting trout fishing advice available on a regular daily/weekly/monthly basis as for the Tongariro River.  i.e.

Whispers on the wind

There are whispers around town this morning of a big Brownie being caught yesterday on the Tongariro, a rare monster from the deep, fooled into feasting on an anglers perfectly presented fly, hounded by fishing paparazzi like myself then comforted and told everything is going to be okay, before being released to be home in time for fish happy hour.  (it was definitely not me)

I haven’t seen this Tongariro Goliath myself and it may just be whispers, but i was fortunate enough to run into good friend and local fishing guide Mike Hughes as I wandered along the banks of the Tongariro yesterday and as I did, Mike himself was getting stuck into a smaller cousin of Goliath Brown. Good stuff Mike.

There are still some really nice fish holding in the Tongariro, the pressure on them at the moment is low, on my walk I spotted outside of Mike only 2 anglers.

The last few fish I have landed have been back on the Nymph rig which has been fun after a solid 2 months of predominantly swinging streamers (Woolly Buggers and the like). Pheasant Tails and Green & White Caddis doing the damage here.

I have found myself on the odd occasion lately being lazy with my nymph setup and not changing the leader or flies to suit when changing water and found myself missing opportunities I should have capitalised on with a few easy adjustments. Don’t be like me guys, do the small things you need first to maximize the big picture.

Have a awesome day and see you at Sporting Life Turangi.

And did you know they even provide the most up-to-date fishing report on Facebook – i.e.  For yesterday: (Yawn…)

Its quite a lazy day here at Sporting Life this morning. John 007 is in the workshop putting together some reels and lines. Peter Carty called in and I made him a cup of tea which is about as productive as my day has been so far.

Big changes are afoot at Sporting Life which we hope our customers are going to love and renovations are supposed to be underway right now, but our Tradies haven’t turned up, so looks like a slow day ahead. But we will keep you posted with some photos of how things are going and the changes being made.

Have a great day all and see you at Sporting Life. 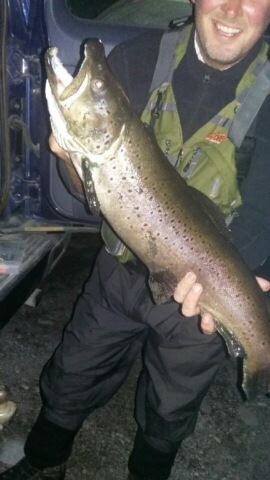 Greetings from Turangi, what a stunning Autumn we have had, beautiful weather, alas, no rain which the rivers badly need.

Up until last week the Tongariro was not holding a lot of fish however since the last day of drizzle which was last Thursday / Friday there has been good numbers of fish throughout the river, going out briefly after work have had no problem bagging a couple of nice fish each time, the hen below was as orange as a salmon, (sorry about the bad quality of both pictures)

Photographed this angler about two weeks ago the Brown weighed 7lb, he hooked another two after this one.

We are of the opinion this winters fishing will produce some nice fish, there is a school of thought which suggests taking fish to reduce numbers and encourage growth, I agree.

Anna was out fishing with Michael from Something Fishy over the weekend they got some nice fish on white Boobys.

Given that we could do with a decent shake with the weather the fishing on the Tongariro has been good in places with some very nice fish been caught . Lyn The reliable got some great fish out of the Tongariro on Saturday hunt around and you will come up with the goods. And there is plenty of room to hunt about Angling Pressure remains light on both the lake and the Tongariro….

Yes sorry for the horrific lack of reports, will try harder to provide more Intel!

What a calm spell we are having in Taupo. Really warm still days, with perfect blue sky’s. That means low rivers and spooky trout!

The Waitahanui had some good fish go through last week and the amount of Brown trout in there would certainly keep most anglers happy, just casting to them. The Rip looked amazing the other day, going straight out, with a strong flow. It has been getting a fair amount of attention over the school holidays by anglers, I hope you pulled a few.

The Hinemaiaia looks like it is in fantastic condition this year.  The poor old Hinemaiaia is going to get a pounding this year by anglers and it can’t sustain that pressure!

Like the Hine, the Tauranga Taupo in in beautiful condition. The pools are snag free and I can see how amazing this river will be with some extra flow to it. The TT is pretty low right now and that will definitely have an impact on the running trout. This river can change in a flood and “That special piece of water you had”, can be inches deep with a snag in the middle of it, once the levels drop back down. However new water opens up and this river once again can be fun to explore. I love the TT.

Ross from TRM, (Tongariro River Motel) was scratching his head the other day, as to where the Trout were in the river. What I did notice, was the lack of angling pressure. I spoke to a friend of mine who had fished the week before and also commented on that. The two trout I hooked that afternoon were fat silver little buggers that fought sooooo hard it was funny. Three pounds of Silver Fury! I did however put a load of work into hooking up, so for that section of river I thought the fish numbers were low. I don’t care if we have a later start to the season, the weather is not helping there. However what I don’t want to see are lots of skinny, silver fish, after a run goes through. This hasn’t happened yet, I just don’t want to see it happen.

The fishing on the lake has improved over the past three weeks and most drop offs have numbers of trout building up, waiting for the next decent rain. Taupo anglers are going to get our first taste of the 2016 Winter Season, soon. I can’t wait to see what it has install for us.

Lets have a little chat about casting:

I consider myself a good caster. I can cast light Dry’s on a 5# or Heavy Streamers and Bombs on an 8#, with everything in between. However I have not always been able to Biff Line, it has come with lots of practice, self correcting and watching others do it right. There was a great fisherman who visited our parts of the world, fishing. His name was Jeremy. Now this guy could cast and had caught pretty much every large species of Fish in exotic parts of the world as one would get. We were fishing early one morning in the Waitahanui Rip together. I had a bloody monstrous 10 foot 8 weight rod that I was trying to throw out Heave and Leaves with. By 9 am everyone had left apart from Jeremy and myself. I was trying to throw as much line as I could with this Beast Rod and was pretty much stuffing it up 7 out of 10 goes. I really wasn’t feeling the rod. We both left the Rip at the same time and when we got to the edge Jeremy asked if he could have a throw with it. I remember him stripping 90 feet of sinking line off and 10 feet of backing. He loaded it up with four false casts and let it rip, throwing over 100 feet of line. Bugger, there goes the theory it was the Rods fault, I sucked. I watched him a few more times as it had to have been a fluke, but nah it was me. So what did I learn from Jeremy? Well lots actually. I noticed his crisp casting, it wasn’t slow between the 10 and 2 positions. This means his “Line Speed” was fast. When you have fast line speed you can throw further. I also noticed on his last “Haul”, that he followed his previous Haul all the way to the first guide, paused, then really hauled down. Man this thing had some line speed. However the main thing was his timing. He let line out both ways while extending line, he could feel when the line had straightened out before his next Haul. In that ten minutes of watching and talking I gained years of experience.

So what do I see as a guide and as someone who watches most fishermen he comes across. I see to many anglers breaking their wrist past the 2 o’clock position, on their back cast. This immediately drops the load off the rod and that final desperate cast they make ends up around their feet. You must stop at 2 O clock and “Pause” for the main line to straighten out. If you do not pause for this to happen, then as you start to come forward, you create a “belly Of Line”, (slack line really) that makes the Rod Lose the Load and it ends up around your ears, (again). So you must “Stop At 2 O clock and you must Pause to let the line straighten out”. So to create the ability to have the line moving fast enough to “Straighten Out” you must have a “Clean, Crisp” action because if you can not generate line speed to make it straighten out, you will have slack line, (in the belly) and it will fall down around your ears. Sounds reasonable and easy, well we all know it isn’t.

I can give as much advice to a client as they wish, however if they don’t self correct a bad cast and just blunder on, then they will never get any better, or it will cost them a tonne in Nymphs before it does. If I stuff up a cast I immediately question line speed and timing. When I am in that “Groove” and casting well, the whole fishing experience is just so much more pleasurable.