For many years I found swirling eddies amongst the most tricky places to fish. This was probably because the current flows were typically powerful, turbulent and unpredictable.

Swirling eddies are often formed where the river changes direction abruptly and are generally deep and difficult to see into. Trout, especially those moving upstream on spawning runs or dropping back downstream following their exertions, seem to like to congregate on the bottom of swirling eddies as the strong current flows offer protection from predation and a steady supply of food.

Several years ago however I read an insightful article from Tony Bishop entitled “How to find trout in pools on rivers and streams” which struck a chord and led me to fundamentally change the way that I went about fishing swirling eddies. If you want to read it in full then click on the following link:- http://www.bishfish.co.nz/webbooks/smttrout/fishingpools.htm

The key paragraphs were:-

The main body of the pool will usually contain the deepest water, with the slowest currents. And once again where your lure is, is the prime factor.

This water can be successfully fished using nymph, dry fly, downstream and spinning techniques. The key is to ensure that whatever fly or lure is being used, it is being fished at the correct depth.

Very often pools are formed where there is a distinct change in the direction of the stream or river, especially where the flow meets a steep bank or cliff. In this situation there may be quite strong, but narrow, currents running alongside the bank or cliff. These are prime fish-holding areas. Drifting a fly down through these fast current areas is often one of the most successful forms of trout fishing. But it can be the most difficult. 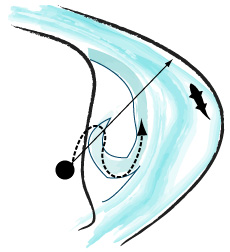 The currents pushing up against the cliff or bank push back-eddies out across the pool. So maintaining the fly in the main current without the line pulling the fly away is often a problem.

One way of overcoming this is to get into a position as directly below the main flow as possible and cast directly up-current. Anything you can do to reduce the angle will help. Another method is to hold the rod tip as high as possible to have the least amount of fly-line on the water as possible.

Years ago I was fishing just below the Waimakariri Gorge, South Island, NZ. The river had narrowed and was further compressed by two huge boulders. The water plunging between these boulders spilled into a deep wide pool. Most of the current hugged one bank, the bank I was standing on, till it thrust up against another steep bank. This bank forced the river into a near right-angled turn. The flow hitting this bank threw off a big eddy that formed a large circular current that flowed back up the pool where it rejoined the main current at the head of the pool.

I tried just about every-which-way to drop a nymph in front of these fish without success. The problem was that no matter how much I tried to drop the nymph downstream of the fish in river terms, where the current formed into the eddy, I could not get the flies to sink until they were well behind the fish.

Finally I decided to cast just to the other side of the current flowing in front of me, but behind the fish. The current picked up the nymphs, pulled them down past the fish from behind, then swung them into the eddy, and down in front of the fish. A few casts later when the eddy did the right thing one of the trout grabbed the nymph.

Actually this story has wider implications.

Most of the time we think of a river as having an upstream and downstream in terms of water direction. In other words, water flow is pretty much constant, in terms of direction. But this is not so.

Even when water is travelling apparently straight downstream in a river of uniform shaped banks, what is happening underwater might not be the same as what appears on the surface. Very often underwater features may alter the direction of the water, and therefore the direction a fish is facing.

In fact the way, or direction, a fish is facing can provide a clue as to where to cast in order to have the fly or lure pass in front of the trout’s nose. If the trout is lying at an angle to the apparent current flow, then, if you were nymphing, the fly might best be cast to one side of it directly upstream”.

Bishop then went on to describe how to float fish an eddy which he considered would “probably cost me my last chance to get to fly-fishing heaven”. His recommended technique was to “tie on a biggish indicator or float, and hang a nymph or small wet fly off a long leader below it. Cast out and let the fly and line swing out and about in the eddy. You will need to be in good control of the line, letting it out, pulling it in, etc. as it swings round and about. Trout often feed in eddies and a free drifting fly, swinging about in the up-wellings and swirling currents will often pick up fish. Glo-Bugs (roe imitation flies) are deadly using this technique”.

The biggest issues associated with fishing the larger swirling eddies, especially on rivers with large water flows such as the Tongariro, are actually seeing where the fish are holding and then determining how to get your nymphs to the bottom in front of them.

The issue of seeing where the fish are holding will generally resolve itself if the angler approaches the eddy carefully and takes several minutes to observe what the current is doing before actually casting a fly. Turbulent water usually reveals its secrets if you take the time to watch what is going on and wait for the occasional windows of calm water to appear. These windows of calm often offer an unrestricted view of the bottom of the eddy as they move around which makes it much easier to spot trout. The old soldiers adage that “time spent in reconnaissance is seldom wasted” definitely applies to eddy fishing.

Working out how to get to the bottom is also not as complicated now as it was due to the availability of tungsten beads and the relaxation of the rules relating to the use of split shot and sinking putty on many rivers. There are physical laws which govern the sink rates of brass and tungsten bead headed flies and these will help in fly selection. This has been covered extensively in a previous Active Angling article on the sink rates of flies tied with tungsten and brass beads which can be viewed by clicking on the following link:- http://activeanglingnz.com/2015/10/15/sink-rates-of-flies-tied-with-tungsten-and-brass-beads/

The key issue here is to ensure that your flies are nudging the bottom and adjusting fly or split shot weight to make this happen. Fortunately it is generally possible to get close to many swirling eddies so casting these heavy weights does not require long casts, just astute placement of the flies as described by Bishop.