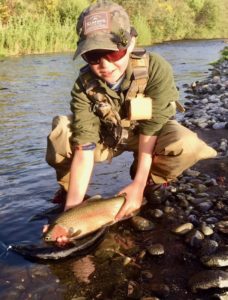 I regularly fish the Tongariro often with friends from the Nelson Trout Club on an annual group trip. These are typically during August to get a winter fishing fix when we all fish hard for a week often through inclement weather. My son Jake currently 9 1/3 always asks when can I come dad. He regularly comes on local trips around the S. Island where he is steadily learning the art of flyfishing and casting.
When a weekend trip to Auckland to pick up a car came up for the Labour weekend. It seemed the perfect excuse for a road trip South to see relatives and spend the bulk of free time fishing the Tongariro. Also the perfect opportunity to take Jake and assist him (when he’ll let me) with his fishing education. 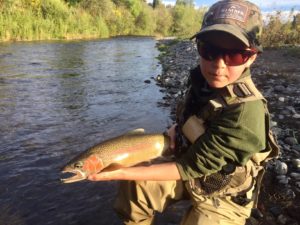 Now Jake is a fairly typical 9 year old lad built like a toothpick with two pieces of string hanging from his waist that make up for legs! Fast as a ferret and some stamina too but easily swept away in any current much above my ankles. Moreover, an 8 weight in his hands would feel like you or I swinging a sledge hammer all day. So a conundrum- how do you go about casting a light rod that will easily allow a whipper-snapper to throw enough tungsten that will get down to the lies
of the Tongariro’s rainbow trout? 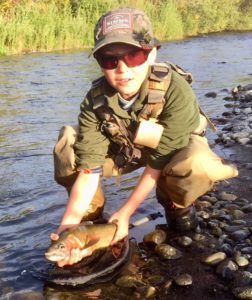 Well the the answer I have found was to use one of my 9ft 5# rods matched up with an Airflo Skagit Scout. This line is 15ft head @ 180 grains and designed to roll cast surprisingly heavy stuff with relative ease. I rigged this up with a running line and we used an 10 ft extra fast sinking tip with a weighted nymphs and trailing glow bug. We changed the tip out when we fished shallower sections to intermediate.
All Jake then had to do was executed his reasonable double Spey and snap T and throw out his proficient roll cast. A few miscasts and timing errors here and there and the odd melt down that requires a calorie break. But in no too much time he was able to throw out some often decent loops with 4mm of tungsten and trailing glow bug up to 60ft, mend then swing and hang.

With the intermediate tip this was particularly effective in the shallower runs and pocket water at the top of Judges. Jake’s current favourite pool.
The result – he netted three good fish, lost even more (from an over eager strike!), put a big smile in his face and improved his confidence.
Looks like I am out of excuses for not taking him on the NTC winter trip!
Congratulations Jake.  Wonderful determination and skills for a nine year old.  We look forward to watching your progress in the future.  You hardly needed a lucky TRM hat.

Previous StoryHow old is this fishing licence sign?
Next StoryTRM lucky hats can be found anywhere