A national rivers and trout fishing advocacy wants caution and foresight in the new government’s ambitious “one million trees” policy so as to avoid monocultures of pines.

Government’s new Forestry Service, aims to plant 100 million trees a year – with the goal of planting a billion over 10 years.

New Zealand Federation of Freshwater Anglers’ president Graham Carter of Hamilton said monocultures of pine trees in many parts of New Zealand had been an environmental disaster with depleted stream flows and heavy silting of rivers and estuaries following clear felling logging. 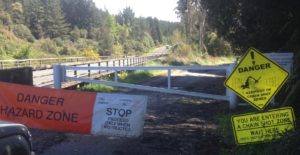 “The emphasis seems to be on planting commercial areas of pine trees although it has been stated planting will include both exotics and natives. The Federation believes the emphasis should be strongly on native trees, and not pines,” he said. 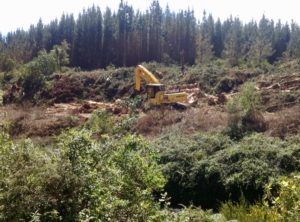 Government statements indicated an environmental element to the plan, as forests planted on Department of Conservation land would be native trees acting as permanent “carbon sinks” to counter climate change.
Past attention about water and river quality had almost exclusively focused on so-called “dirty dairying” but there were other land-use questions to be answered.

“For instance have monocultures of large scale forestry had detrimental effects ecologically and environmentally to rivers?” asked Graham Carter. 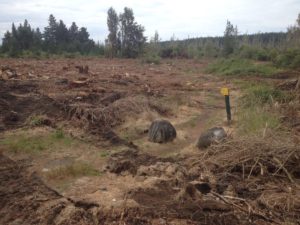 The practice in NZ of clear felling pines exposed steep hill country to heavy runoff of silt and debris, when rains occurred. But run-off could be reduced by two-stage harvesting of forests,  as apparently  practised in Europe where felling is in done in two cuts perhaps 12 months apart, along contours thus reducing runoff.

Another aspect of forestry monoculture that should be investigated was lowered pH levels i.e.acidification of the soils and therefore increased acidic runoff into waterways. 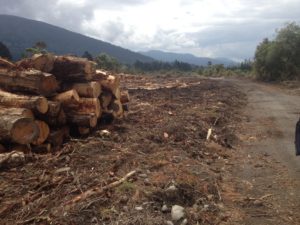 “The pH level (degree of acidity) is important to both bottom fauna and subsequently aquatic life such as indigenous fish and trout. If the pH drops below 5.5 (increased acidity) then long term damage to the fishery, both native and trout, occurs.”

Pine trees take much more water from the environment than native vegetation and reports were where pines have been planted, stream flows were noticeably less and even disappeared. 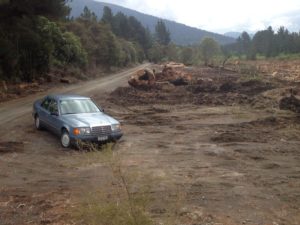 Establishment of pine forests often resulted in clearance by burning of early regenerating of native vegetation ranging from fern to native shrubbery and bush so that hillsides could be roaded and pines planted for the dubious purpose of carbon trading said Graham Carter. 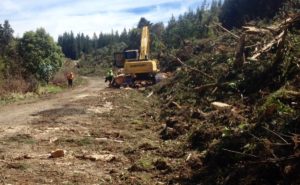 “It is easy in this case of exotic monocultures to ‘not see the wood for the trees”, he said. “While a superficial glance at extensive forests might seem beneficial, in the case of monoculture of pines, there are various detrimental effects.”

Urgent study and policy should aim to to implement better harvesting regimes as practised in Europe, zoning of land use to avoid extensive pine forest monocultures and making mandatory creation of 50 metre buffer zones along all rivers and streams said Graham Carter.

One encouraging aspect was Shane Jones’ pre-2017 election statement that foreign ownership of Northland forests was “out of control”.

“We hope post-election that Shane Jones will be assertive on the foreign ownership aspect,” he said