Freedom Campers – coming to you everywhere this summer? 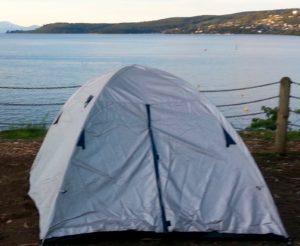 He believes the scale and nature of the free camper problem is not being accurately portrayed.

“This situation isn’t new and is a large part of why there has been no management response or plan over the past four years to the issues, and that we now have the scale of problems we do,” he tells IT.

The photographs represent only half the area where free camping is occurring and there are no images from the south end of the lake, where it is also a significant problem.

“The images essentially show non-compliance in terms of where they are parked/tented/sleeping in reserves, streets, roadsides, and what are considered to be ‘compliant’ (green- and-white sticker) vehicles, many of which clearly have no on-board waste facilities at all. Most importantly, though, they show the problem is much larger and differs in nature than what is being portrayed,” he says.

“Council staff will explain to you that, under the Freedom Camping Act, they do not need any facilities, but this is a red herring. You have the powers to control, manage or where appropriate ban this activity, and many other areas have successfully done just that with no impact on their reputation as a tourist friendly destination.”

Mr Henderson had earlier asked the photographs be passed to elected members and council staff members. But this appears not to have happened.

The council has now decided to temporarily close Reid’s Farm, the free campsite alongside the Waikato River.

“As the police have raised serious issues about behaviour at the site, it has to be permanently closed or operated as a commercial facility at no cost to ratepayers, who have already spent about $120,000 on it over the past three years.”

But if the site is to be permanently closed the scale of the problem at the remaining sites will increase by up to 20 percent, he says.

“On any busy evening this summer there were about 500 free camper vehicles and tents within 5km of the CBD, with about 100 of these vehicles containing people simply sleeping in their cars in the street or elsewhere.”

Outside Reid’s Farm “there is significantly greater risk of continuing to do little to nothing in the short term as is being proposed, and I would suggest the ‘unforeseen consequences’ in the council report are being overplayed in part to convince you that it’s not necessary and possibly politically risky, to do anything significant before an election.”

There are many short-term measures the council can undertake now without a bylaw – such as physically restricting overnight vehicle access to reserves where camping is already illegal under the Reserves Act.

Access to the waterfront for Taupo locals and other visitors – particularly the many athletes training for events – is at times severely restricted. He suggests the current demand could easily be accommodated away from the Taupo urban waterfront, in existing council-owned off-street car parks and even closer to where the suggested economic benefit may be occurring.

“Yes, the free camper legislation is poorly conceived, but no other council in a major tourist area has done less to respond to this issue over the past four years than TDC. Destination Great Lake Taupō, the district marketing authority, for example, was not consulted the last time they reviewed this in October 2014 and has been silent on the matter since,” Mr Henderson says.

“The environmental, social and district brand impacts of this are spilling over to adjoining areas, so you cannot act in isolation. Therefore lets hope the DoC site at Five Mile Bay, and the free for all on DIA land at the Taupo Yacht Club are also considered. 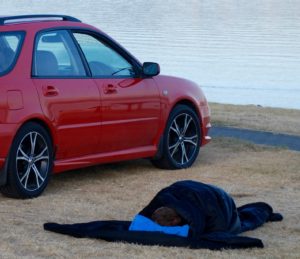 “Most importantly, it’s long overdue for council to start talking to the public and electors as the most important stakeholders. These are the people who, in some places, cannot access the lake edge in summer and are paying for this circus.”

TRM add the Council should have a look at the southern end of the lake as well – in particular the anglers access tracks into the Blue Pool, Stag Pool, Admirals Pool, and even in town at the end of Te Aho Street.  During the summer months these picnic areas are constantly abused.  With no facilities available the mis-named ‘tourists’ (?) dump in the bushes and abandon all their garbage and nappies etc. near their overnight camping spot.

The ‘freedom campers’ are usually unacceptable unreasonable ignorant inconsiderate grubby vandals who couldn’t care less for crapping in our precious natural 100% pure environment.  By allowing them access at all the Council are encouraging their poor behaviour. 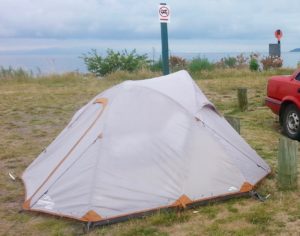 (These comments do not include those responsible members of the Motor Home Association whose members in self contained camper vans are always considerate and whose reputation is being destroyed by these other rude sods constantly leaving all their rubbish behind – see below!.)

The other so-called ‘freedom campers’ (?) are not welcome at TRM or most other motels.  Why?  Previously, when we have reluctantly allowed them in, they completely take over every facility such as the free laundry, washing machines and dryers, etc. all day catching up with a month of grubby clothing, etc. steal all the spare toilet rolls, soaps, tea, coffee, hot chocolate, even the salt & pepper and washing up liquid, towels, duvets, and anything else from the units.  We always get complaints about them after they leave so we do not want to be seen to encourage them any further…

As such, we concur with Rob Henderson.  This is a tough call which we will pay for as we have some good friends who live out of a fully self contained luxury camper van (Hi Faye & Mike) as part of their retirement plan, but there are just far too many abusing the situation.

Rob replied to suggest it cannot be banned so I removed that comment – i.e.

The main points are…

1 – There is no plan for managing this (and our Council and DGLT have had the least response of any tourist area in NZ etc)
2 – Its damaging to the District brand
3 – The situation isn’t being accurately represented (wilfully or otherwise)
4 – The decision making process is far too long when compared to other areas (i.e. 12 months minimum, others are taking 4-6 months)
5 – Why should ratepayers be asked to continue subsidising it, and residents have to put up with it through loss of access

Regardless of the merits, there is no point trying to ban it because…

A – we don’t even have an accurate definition of what acceptable free camping is/isn’t and the required standards
B – now the genie is out of the bottle you cannot put it back, they have to go somewhere – just manage it and
C – the abysmally conceived Freedom Camping act makes it difficult to put blanket bans in place