Thanks to Marc Geerlings for following update:

Great staying at the motel once again for a few days early this week.

The trip this time was more of a gentleman’s fishing trip as had an elderly friend (70s) with me.

Late starts and not more than a couple of hours at a time. Even with limited time we fished the easy to wade mouths.

There were fish about and one really nice 4 1/2 lb rainbow that really put up a fight. The jack was almost salmon orange inside and great condition which bodes well for winter runs.

Photo of jack below after cleaning and vacuum packing attached.

Again thanks for your usual great hospitality and looking forward to returning for another stay during the winter. 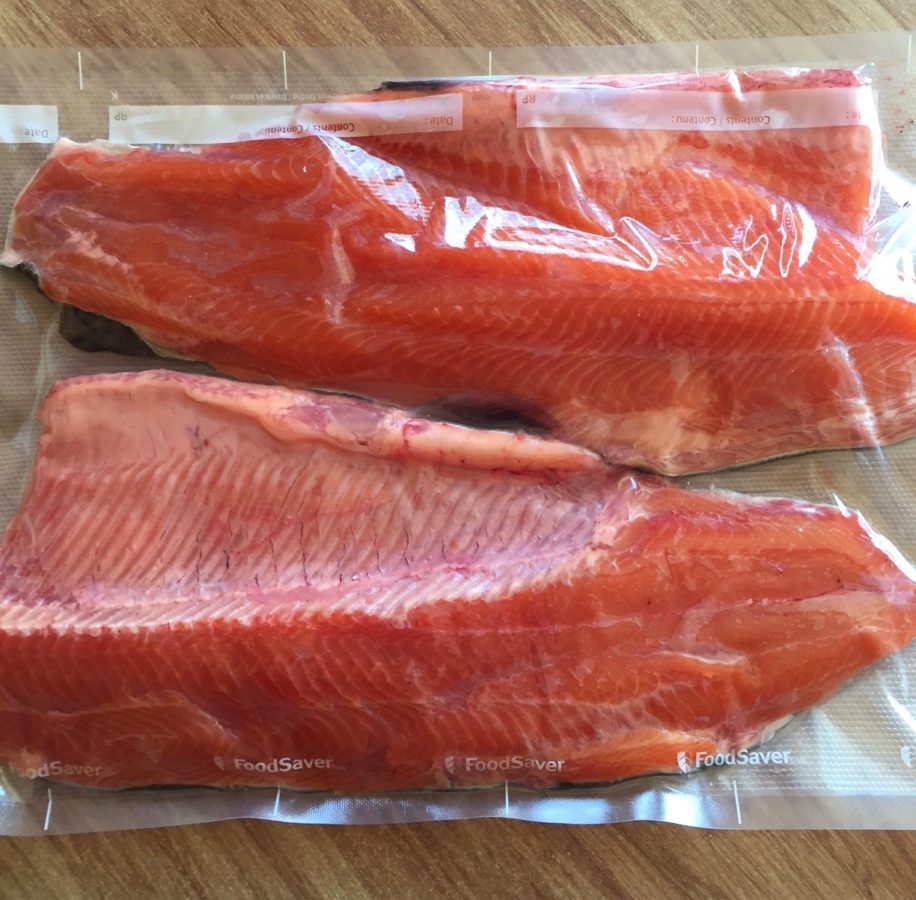 Thanks Marc.  Now just have another squiz at the superb condition of his fillets above.  We suggest these would be very difficult to improve on anywhere else in the world.  These wild Lake Taupo trout thrive on a natural diet of whitebait and koura (fresh water crayfish).  They are what they eat.  Just superb. 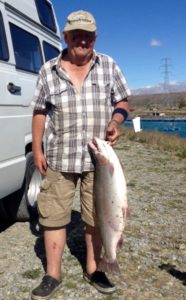 It reminds me of a while ago when  I was returning from the upper W(h?)anganui River with what I thought was a great 5 pound plus Rainbow when I came across the farmer who owned the land – just in case we were poaching (?) I immediately offered him my trophy trout as a peace offering – as you do.  He laughed and declined as he replied he only eats Taupo trout.  You can see why.

We often see images of massive trout or salmon raised on pellets loaded with toxic growth hormones from the salmon farms with salmon suffering genetic mutation (?) in South Island canals.  They are not in the same class as the wild Taupo trout raised in a natural environment.  It really is a world class trout fishery.  That is why it needs to be protected much more than at present.

Then compare the Taupo version above to farmed salmon and count our blessings in Turangi.  This is what salmon from the South Island canals have to look forward to:

It’s safe to say, that often times, we overlook what is behind the food that is in front of us. Fortunately, in this day and age, we are living in a time where people have become more conscious and critical of the food they’re eating. With the growing movement of people straying away from animal product consumption, we are naturally beginning to learn more about why people are cutting out this aspect of their diets.

Fillet-Oh-Fish, by director Nicolas Daniels, takes a critical look at the fish industry, investigating fish farms and factories all over the world in an extensive initiative towards educating people on the fish they consume. Though our perception of fishing is rather ‘romanticized’, according to Healthy Holistic Living, when it comes to large-scale food production, it’s an entirely different story.

According to Dr. Joseph Mercola, “Today’s fisheries are faced with a range of severe problems, from overfishing to chemical pollution and genetic mutation from toxic exposures.” The producers of the documentary note that through intensive farming and global pollution, the flesh of the fish that we eat has turned into “a deadly chemical cocktail”. Even so, the fish business continues to boom, merely to protect the image of modern fisheries from the public.

The investigation kicks off in Norway, where they have a look at the chemicals that are used in fish farms today. A respected Norwegian environmental activist by the name of Kurt Oddekalv believes that the farming of salmon is “a disaster both for the environment and for human health.” Among the Norwegian fjords that contain salmon farms, there is said to be a layer of waste about 15 meters high, consisting of bacteria, drugs, and pesticides. The seafloor is apparently destroyed, and due to the sea farms being situated in open water, there is no way to contain the pollution as a result of these farms. Upwards of 2 million salmon can be held in a crowded space, with the crowded conditions leading to disease that spreads rapidly through stressed salmon. Oddekalv reports that sea lice, as well as Infectious Salmon Anemia Virus has spread across Norway, while consumers are not informed of the fish pandemics, and continue to purchase diseased fish.