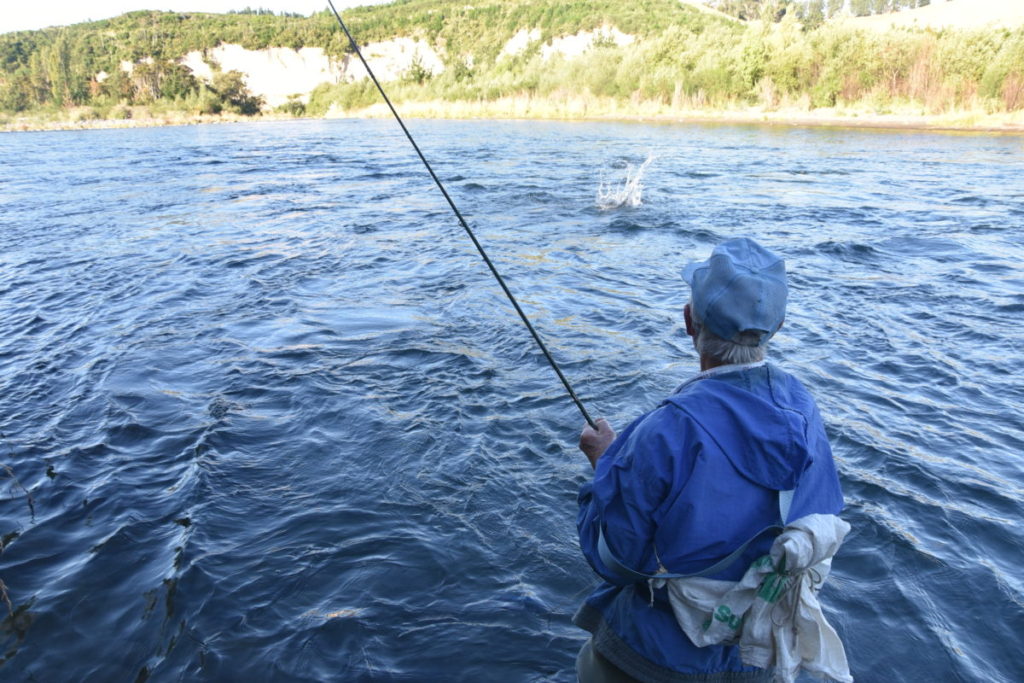 Bill Hawkins is one of our more “mature” anglers at 84 years young.  He last featured in a TRM Daily report about 2010 so it is time for an update.

At this time of the year there is always considerable debate and anguish with river fishos over what to use?  As the surrounding bush orchestra is a resounding buzz punctuated with loud clicks it would suggest a ciciada pattern – usually with a little dropper dangling below.  On Friday in the upper river Richard Mowforth got his first two hits on the cicada and the next four on the dropper.  Then others like Paul Gandell had no takes on the dry so switched over to traditional weighted nymphing rig and immediately hooked up…

No one has interviewed the trout on their preferences yet.  Everyone is usually eventually successful – that is what the Tongariro fishing is all about.

Then we have the Bill Hawkins’ unique style.  It doesn’t matter to Bill which pool or month or where the moon is or isn’t, as he has his own special trout rig which he has used successfully for the last 70+ years.  Nobody could argue with that track record.  So why change?  Similarly you will notice Bill’s pack – the traditional pikau sugar sack to carry the trout back.  He has to be a nightmare for fishing tackle shops. 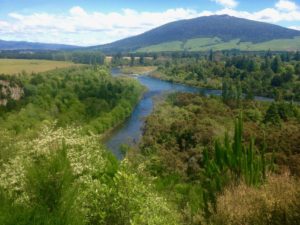 Simplicity is the key – All he ever uses is a long shank snapper sized hook with a piece of wool about one inch long (Bill hasn’t had time to convert to metrics yet) dangling off it.  He calls this “fly” Billy’s Dream.  Due to the physical limitations of old age he does not do any fancy high sticking roll casting or mending or delicate presentation or any of that modern stuff.  He wades into the nearest pool and flicks enough line out and then just wriggles his whitebait imitation until it drives the trout insane and they have to attack it.  He usually goes to the nearest pool to TRM and fishes in riffles where others don’t bother.  He makes it all so simple he is dangerous.

So the images on right are Bill showing his style with his grand daughter Ingrid to do the heavy netting and lifting work on the net.  On a busy weekend when others were struggling Bill casually returned with his limit.  Congratulations Bill – the other inmates were amazed.

Great images thanks to Tony Hawkins.  Tony wrote: ” … An avid wet line angler who prefers to let the rapids do the work with his trusty Blue Dolphin reel, hand made landing net and his hunting pikau – it’s all about fishing and having a good time.  Thanks Ross for your help and hospitality, a great weekend Dad won’t forget.”