Tongriro flow at Turangi over the last seven days… 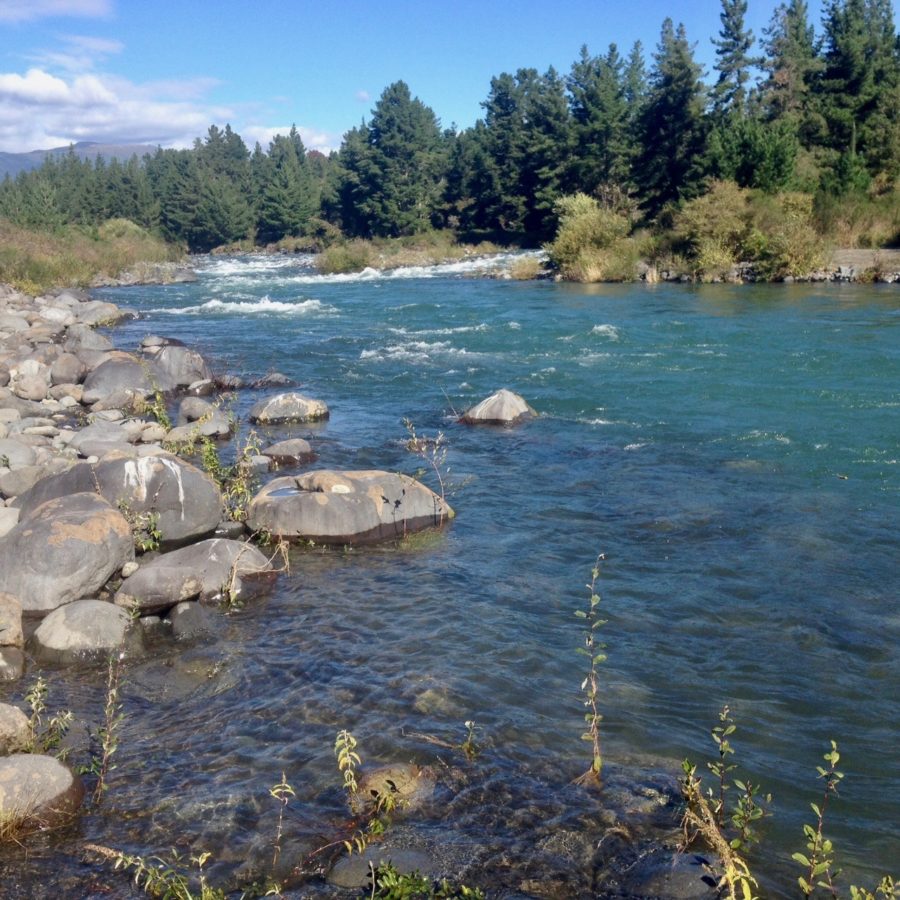 Above image last Saturday looking up river from TRB of Big Bend Pool when the river is in flood at about three times normal flow – as you can see there are some such little spots that can still be fished successfully as long as you are prepared for the long slog up from the Red Hut Bridge. 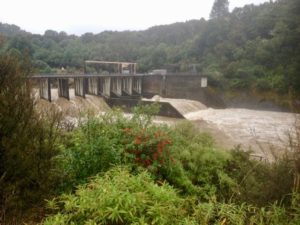 So many anglers asked where to fish when the Tongariro is in flood?.

In general weather pattern terms, without being too specific, if the Tongariro is flooded, so are all the other rivers – Whakapapa, Wanganui, Mohaka, Rangitikei, etc.  The prevailing westerlies make sure most of the rain is dumped on the surrounding hills and national parks surrounding Turangi.  This includes the Tongariro catchment in the Kaimanawas.

So the question is usually where to go on the Tongariro as nearly all other alternative option rivers will be flooded as well.  There are exceptions such as the Waitahanui which is mainly spring fed and not relying so much on run-off. 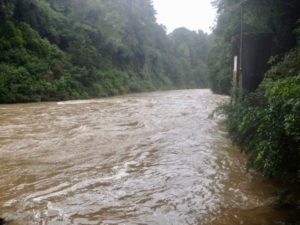 The first consideration for suitable alternatives to the Tongariro are the surrounding lakes of Taupo and Rotoaira and Kuratau and Lake Otamangakau.  Those without a boat can hire a water strider raft.  These are free for regular guests (of BOF’s status) but naturally SWMBO needs to be very selective as they are expensive machines to repair.  They are strictly controlled for safety reasons and entirely at lender’s risk.

Back to the Tongariro in flood, there are pools that can be fished in flood – along the edges like the TLB of Bridge Pool, Lower Bridge Pool, Breakfast Pool, but the best results for TRM inmates have all come from the various bypasses.  There are several wet weather opportunities in the Braids below the Bridge Pool, above the SH1 road bridge under the cliffs – below Judges Pool, smaller over-flow streams above Judges Pool and below the Island Pool, or above Red Hut where the longer side channel is more stable from Boulder Reach or above that again below Big Bend Pool. 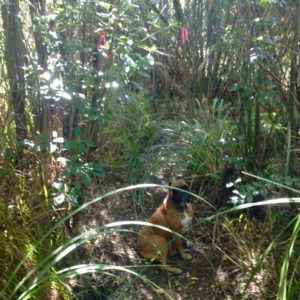 TRM checked all these out on Friday 7 April in the town pools and Saturday 8 April further up above Red Hut when the Tongariro was still flowing about three times above normal flow.  Generally they looked too fast and unfishable but the trout were still hanging in there along the shallow edges to keep out of the main current.

The old angler access track leading up river above Boulder Reach to Big Bend Pool and beyond is hard to find and in places almost disappears.  It takes about 40 minutes to walk up from the car park at Red Hut.  I was fortunate in having a reliable guide – Pumpkin – who can smell where others have walked although we did not see a single footprint up there.  Instead the only sign of an intruder were bike tyre tracks!

As you can see in the image above on right the faint track is difficult to follow and marked by DOC with pink ribbons to locate their rat traps. 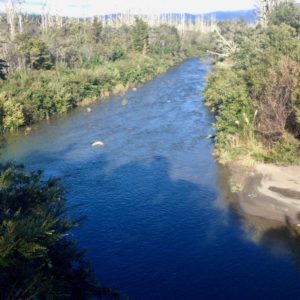 Image on right is looking up the flooded bypass below Boulder Reach.

No-one has interviewed the trout yet but the general understanding is that they need to get out of the turbulence for shelter and also as the main flow carries heaps of pumice and ash which irritates trouts’ gills (this takes many years to filter down through the native bush and tributary streams to the river after a volcanic eruption on Tongariro National Park).

These narrow shallow side channels are often too difficult or impossible to wade in flood so most anglers try to walk along the banks flicking or dipping short drifts – rather than usual casting with an olive woolly bugger or big glo-bugs or pink/orange bead-head weighted hare & copper nymphs.  This is more than just theory as all TRM anglers returned with trout for the smoker over the weekend.  The best caught 4-5  on each trip.  Some of these trout were in excellent condition. 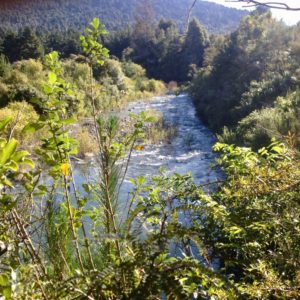 Image on right looking down bypass below Boulder Reach when the main river is in flood.

One of the most wonderful natural features of the Tongariro is that it recovers so quickly.  While the Whakapapa and Wanganui and Mohaka etc. may take a week or so, the Tongariro is fishable within a day or two.  This is usually due to Genesis – the power company – needing the water to spin the turbines at Tokaanu Power Station and dropping the flow much quicker, but at the moment they are carrying out maintenance inspections in the Rotoaira tunnels so the recovery has been a natural process.

Image below looking down from the TRB (True Right Bank) over the Fan Pool when the Tongariro is still in flood last Saturday – flowing at about 80-90 cumecs or three times the normal flow.  The cliff above the Cliff Pool can just be identified in the distance shadow on the right.

Below is view up river to illustrate the shallow bypass below Judges Pool on left of photo and smaller bypass on right of photo above Judges Pool.  Image taken November 2011 when Tongariro was at normal 26 cumec flow.  The river flows have changed since with less water flowing in the bypasses.  But that could change again so easily… 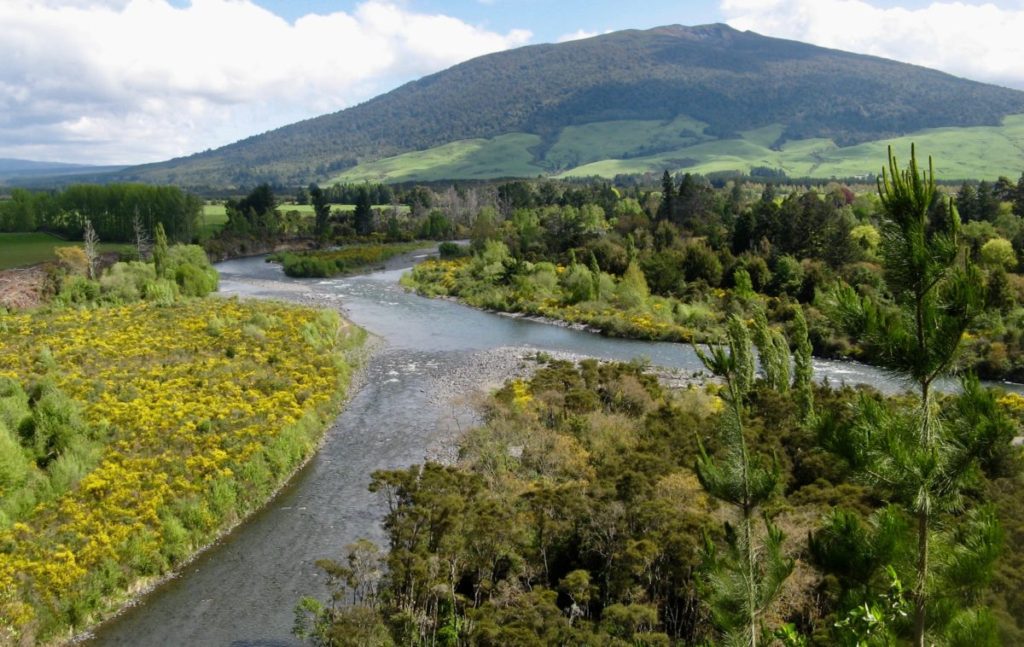