(Images of crowding issues below from TRM library)

First, to put it all into perspective, we repeat the comments from Dave Bamford in his report repeated in TRM Daily Report on 25 January:

Looking at the big picture what has happened – and it’s possibly a decade overdue – is that we are now prioritising ahead of visitor demands the health and integrity of this part of Tongariro National Park. The Crossing has a long history of use. However over the last 50 years there has been considerable change in the track quality, the type and volume of visitors, and the social and environmental impacts of increased use.

In the mid-1970s the crossing was a rutted, deeply eroded pumice track that had fewer than 1,000 visitors in an entire year. It was very much a tramper’s adventure. By the 1990s the track had become a popular tourist attraction with more than 10,000 walkers in 1992/3 enjoying a well-managed and upgraded track. In 2012/13 there were more than 63,000 walkers.

This number has more than doubled in just the last five years to over 130,000 walkers last season. Managing this number of walkers and their impacts is essential….

TRM have spent years trying to warn and discourage naive tourists (to send them to other easier shorter trails with equally similar scenic qualities and even better views, alpine experiences, etc.) but we understand once it is on the “bucket list” they have to do it.

So why did it suddenly get out of control and become so popular ahead of the rest of the other scenic Tongariro Northern circuit tracks and so many other hiking trails?

It was the “power of advertising”… via Lonely Planet.

In the original edition over 40 years ago the Tongariro Crossing was described as “The best one day walk in NZ” (?).  It was as simple as that.  Lonely Planet was a runaway success with tourists.  One critic claims it was the only walk their “travel writer” did in the Tongariro National Park.  It was all he had time for in his tight schedule.  Immediately after the NZ version was published all the travel agents jumped on board, as did shuttle bus operators, iSites, etc. to sell it to tourists as a “must do” during their North Island travels.  So many other equally scenic trails missed out.

Imagine what might have happened if they promoted trout fishing on the Tongariro River instead?

The (current) Lonely Planet description is as follows – note it now warns of the need for appropriate clothing, fitness, crowding, etc…

This popular crossing is lauded as NZ’s finest one-day walks with more than 100,000 trampers finishing it yearly. It takes between six to eight hours to complete the 19.4km mixed terrain walk amid steaming vents and springs, stunning rock formations, peculiar moonscape basins, impossible scree slopes and vast views – the most iconic across the Emerald Lakes. 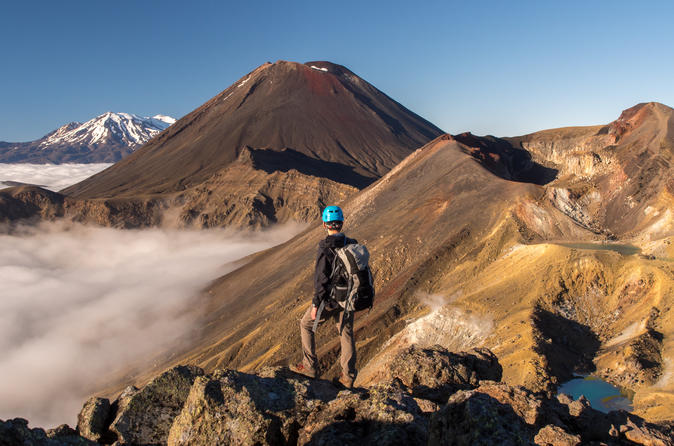 This is a fair-weather tramp. In poor conditions it is little more than an arduous up-and-down, with only orange-tipped poles to mark the passing of the day. Strong winds see trampers crawl along the ridge of Red Crater, the high point of the trek, and can blow people off their feet. A sunny day could still be a gusty day, so check in with your nearest information centre. The most crowded times on the track are the first nice days after Christmas and Easter, when there can easily be more than 1000 people strung out between the two road ends.

This is an alpine crossing, and it needs to be treated with respect. You need a reasonable level of fitness and you should be prepared for all types of weather. Shockingly ill-equipped trampers are legendary on this route – stupid shoes, no rain jackets, blue jeans soaked to the skin – we’ve seen it all. As well as proper gear, you’ll need to stock up on water and snacks. If you’re keen to undertake a guided tramp, contact Adrift Guided Outdoor Adventures or Adventure Outdoors.

The Crossing starts at Mangatepopo Rd car park, off SH47, and finishes at Ketetahi Rd, off SH46. As of late 2017, a four-hour parking restriction at the Mangatepopo Road car park has been implemented to resolve overcrowding. Those undertaking the crossing need to organise shuttle transport, often your accommodation can provide a reccommendation. Shuttle services operate from Whakapapa Village, National Park Village, Turangi, Taupo, Ohakune and Raetihi.

Once again, below is TRM’s two minute video of our recommended preferred superior alpine tramp – if you are really looking for a “Bucket List” experience that you will remember forever…

Lonely Planet was founded by married couple Maureen and Tony Wheeler. Tony Wheeler graduated from the University of Warwick and London Business School, and was a former engineer at the Chrysler corporation. The pair met in London in 1970 and, in July 1972, they embarked on an overland trip through Europe and Asia, eventually arriving in Australia in December 1972. The route that they followed was first undertaken by vehicle on the 1955 Oxford-Cambridge Overland Expedition.[8][9]

The company name originated from Tony Wheeler’s appreciation of a misheard line in “Space Captain”, a song written by Matthew Moore, and first popularized by Joe Cocker and Leon Russell on the “Mad Dogs & Englishmen” tour of 1970—the actual lyrics are “lovely planet”.[10] Lonely Planet’s first book, Across Asia on the Cheap,[11] consisting of 94 pages, was written by the couple in their home.[12] The original print run consisted of stapled booklets and sold out.[13]

Following the success of the original booklet, Tony Wheeler returned to Asia with the deliberate intention of writing a travel guide and Across Asia on the Cheap: A Complete Guide to Making the Overland Trip was published in 1975.[12][14] In October 2007 Observer writer Carol Cadwalladr—who also coauthored Travellers’ Survival Kit Lebanon—described the book as “canonical”.[12]

Across Asia on the Cheap offered the advice of amateur travelers who had completed the overland trip from London to Sydney, Australia in just under six months. The Wheelers offer practical advice, such as the importance of not mentioning “arch enemies, Iran or Israel” in Iraq, as it is a “very hard-line socialist Arab country”; casual observations, such as their description of Singapore as a “groovy place”; tips of an illegal nature, such as where to obtain fake identification or an explanation of why one should have their “last drag” of the drug cannabis before they arrive at the Iranian border; and emergency options for people in need of money, whereby places that “have a good price for blood” are identified.[6][12]

During the 1970s, traveling was considered an aspect of the counterculture and Tony Wheeler said in 2013: “The boomers were setting off to places their parents hadn’t gone.” What became known as the “hippie trail” was a popular route for such travelers, as the price of travel dropped and numerous Asian travel companies were launched.[13] Cadwalladr explained in 2007 that the introduction of the Across Asia on the Cheap booklet was “a generational call to arms”, as it contained Tony Wheeler’s motivational cry: “All you’ve got to do is decide to go and the hardest part is over. So go.” Cadwalladr further states that Wheeler’s peers throughout the world subsequently made the decision to travel, regardless of whether they possessed a Lonely Planet guide. Other travel guide brand names also emerged in the early 1970s, such as Rough Guides and Bradt.[12]

The popularity of the hippy trail, combined with the success of the original Lonely Planet publications, led the Wheelers to further develop the brand they had founded. The couple discovered writers in bars and also told people that if they could return to Australia with a completed book, then Lonely Planet would publish it. Tony Wheeler explained: “You couldn’t just look for travel book writers because they weren’t out there. There wasn’t such an animal. We just told people that if you turn up in a year and a half with a book, we’ll publish it, and we did. It was very rough and ready.”[13] The popularity of the overland route taken by the Wheelers in 1972 declined when Iran‘s borders closed in 1979.[8][9]

The Lonely Planet guide book series initially expanded in Asia, with the India guide book that was first published in 1981,[15] but progressively became a dominant brand in the rest of the world, as consumers appreciated the way that the manner in which the guides were written—as former CEO Judy Slatyer explained: “telling it like it is, without fear or favor.”[6] Wheeler explained in 2013, as part of the brand’s 40-year anniversary, that working with the company’s early writers, who were primarily travelers, was often challenging:

One writer came back with a 600-page guide to Jamaica—every pirate who stopped in got his biography—and we had to cut it by two-thirds … For a long time we had a problem that every writer wanted to rewrite the history. We’d say, “Why are we rewriting the history of India for the 10th time? Surely, it’s not changing every two years.[13]

In a 2007 interview, Tony Wheeler discussed one of the original Lonely Planet writers, Geoff Crowther, who wrote guides for India, South America, Africa and Korea. Crowther was renowned for frequently inserting his opinions into the text of the guides he wrote, giving the guide books real, gritty and un-politically correct passion and sometimes covering topics such as where to purchase the best hashish. His writing was instrumental to the rise of Lonely Planet. Tony Wheeler explained in the same interview that Crowther was, at that time, a “broken man living in Goa”, while the journalist used the term “Geoffness”, in tribute to Crowther, to describe a quality that has been lost over time in travel guides.[12] However, Crowther at the time was not living in Goa, nor was he a broken man, instead he was living in the rainforests of East Coast Australia.

By 1999, Lonely Planet had sold 30 million copies of its travel guides and, by this stage, the company was recognized beyond hippie trail adventurers, and wealthier readers were an established part of the readership. The company’s authors consequently benefited from profit-sharing and expensive events were held at the Melbourne office, at which limousines would arrive, filled with Lonely Planet employees.[6] By 2007, Lonely Planet had officially been classified as a “Superbrand”, having published over 500 titles and had sold 80 million titles, translated into more than eight languages. Cadwalladr relayed a rumor that, during one of his visits to Australia, Bill Clinton requested an audience with the Prime Minister and “someone from Lonely Planet”.[12]

Previous StoryBoulder Reach access & a river waiting to happen
Next StoryCheaper than therapy?