A keen tourist biker guest asked about progress on the T2T (Toe-paw to Turangi Bike Trail) and suggested that, after so many years of trying, it might be a waste of time still trying to promote the T2T? “Flogging a dead horse” was the expression he used. We cited a recent example of overcoming similar bureaucratic nonsense and procrastination was the Dunstan Trail – where the bikers count in January alone exceeded their reluctant Council’s annual estimate of usage. This led me to dig out the following article from Wilderness Magazine, from about a year ago…

An inspirational story from Wilderness Magazine – make yourself comfy with a cup of tea first. This is a reminder of the essential need to persevere with a project… for all those critics of the T2T… Good things take time.

“The walk that saved the Milford Track – How a group of young trampers opened the world-renowned track to the masses:

And that is why TRM perseveres to promote the T2T project. Over $100,000 has been “invested” by Council on Feasibility Reports, etc. They all confirm the viability. Yet Council continues to procrastinate and the region misses out on $Millions that such a bike trail would generate.

A year ago TRM posted the following blog:

Further to the announcement that $15.9 Million is available for recreational purposes in Turangi, TRM repeat the news article published 3 years ago by Robert Steven.

The Council support concurs with the Economic Strategy Report previously prepared which advised the bike trail was the most important project to secure the future prospects of Turangi.

Since then in late 2020 the Council Transport Strategy Committee confirmed the bike trail extensions as a priority project.

An economic development plan for Taupō features an $18million walk/cycle trail and a bigger airport terminal.

The “District Economic Strengthening Strategy” report has been approved by councillors and sent out for public scrutiny this week.

It includes six “catalyst projects”, which involve upgrading the airport, the civic precinct, creating a “tertiary hub”, promoting the district’s geothermal industry, marketing the Wairakei Tourist Park, and building a cycle trail from Turangi to Taupō.

Mayor David Trewavas is scheduled to meet with Minister of Regional Development Shane Jones on Friday to discuss the plan.  This follows a meeting in Wellington last month.

“We’ll talk about our application for a share of the Government’s Regional Growth Fund, which could provide some revenue to facilitate these developments,” he said.

“It’s an exciting time: we’re transforming from a provincial town to a reasonable-sized metropolitan, and we need the infrastructure to cater for this.”

It is hoped the proposed Turangi-to-Taupō cycle trail could join the list of New Zealand’s Great Walks, Trewavas said.

“For all those areas down south [of Taupō], this would be a huge game-changer

However, the cycle route could not go via the narrow, winding roads at Bulli Point, he said.

The trail would need to go inland, like the existing stretch of SH1 between Waitahanui and Hatepe.

“There is a long-term plan to divert [SH1] from Bulli Point, but it’s quite a fair way out,” Trewavas said.

“We’re advocating that the government bring that forward.”

Agreements with the owners of the land the trail would pass through, which is currently forestry, would also need to be reached, he said.

“The potential economic benefits of the cycle trail would be huge, so we’re certainly trying to push our way through this with all stakeholders on board,” he said.

“It’ll be a walkway as well. It’d be great for accommodation providers and local businesses the whole way along the trail. It’s a huge opportunity for everyone.”

The total cost to build the track is estimated at $18.3 million

Construction of the trail will create new 47 regional jobs and between $2.87m and $4.71m in annual regional income, the report says.

The Dunstan Trail is the most recent precedent to confirm the need for perseverance: Friday, 1 April 2022 feature article from the Otago Daily Times:

Central Otago’s newest cycle trail is on a roll and smashing expectations for visitor numbers.

More than 62,000 riders have used the Lake Dunstan Trail since it opened in May last year.

Some 12,068 were picked up by trail counters in January alone, which is as many as the trail network had hoped to see in a year.

The Central Otago Queenstown Trail Network Trust, which manages the Lake Dunstan Trail, said they were well ahead of where they had expected to be.

This week, chairman Stephen Jeffery told Newstalk’s ZB’s Mike Hosking that it has been a boon for local business owners.

Between $10 million and $12 million rode into the local economy in secondary spending along the track from Cromwell to Clyde. 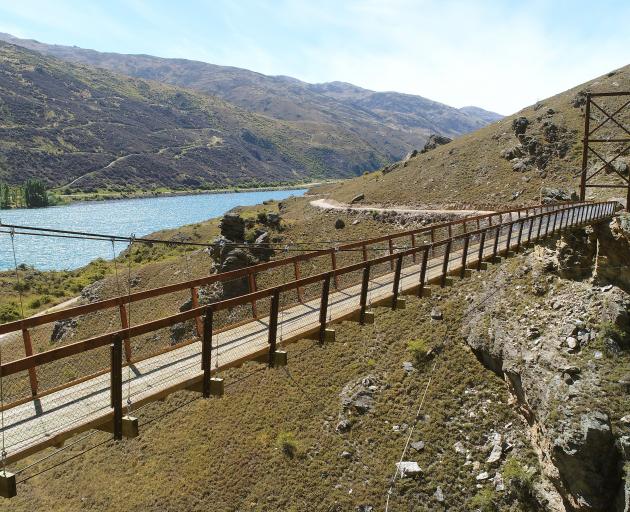 A suspension bridge spans a ravine on the Cromwell Gorge cycle trail.
The track had high hopes for the arrival of Australian tourists next month, when borders open to quarantine-free travel on April 13.

He expected that the number of inbound Australians is likely to “balance out” by the number of New Zealand travellers exploring further afield or trying something new.

“One of the limitations on the trail is the natural cap of hire bikes on the trail,” he said as inbound travellers tend not to fly in with their own bikes.

Herald Travel reported there is already a big waiting list on cycle rentals for the trail ahead of the Easter and Anzac holidays.

A switchback eases a steep climb on the trail.

Clyde and Cromwell-based hire company Bike It Now! said business had been “Flat Out” entire fleet was booked out over April.

Highlights of the 55km trail include suspended cycleways built into the side of the Cromwell Gorge and refreshments delivered by boat at The Burger Afloat and Coffee Afloat, on the banks of the Clutha River.