Directed by Gaylene Barnes and Kathleen Gallagher, Seven Rivers Walking – Haere Marire looks at the freshwater crisis facing the region.  Billed as “intimate portrait of the struggles around water and its useage”, it features local walkers, rafters, farmers and fishing folk airing their concerns about the degradation of Canterbury’s rivers and other waterways.

It clearly struck a chord with Christchurch audiences, with its world premiere attracting a rare sell-out crowd at the Isaac Theatre Royal. That was followed by a successful run in two Christchurch cinemas, as well as one in Wellington and special screenings elsewhere.

But now, with Conservation Week upon us, the creators are keen to expand their audience, via select screenings around the country and the release of the film on demand (on vimeo.com) this weekend. 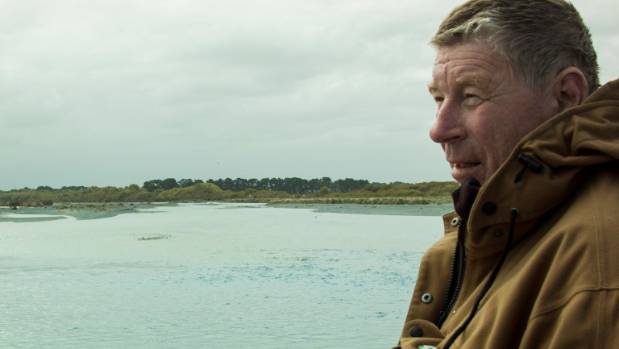 Seven Rivers Walking looks at the state of Canterbury’s waterways and talks to the people who care about them.

Co-director Barnes says she’s been blown away by the documentary’s reception so far.

“We weren’t sure how people in [places like] Matakana would receive our ‘Canterbury’ film, but every screening I’ve been to there are people in tears. 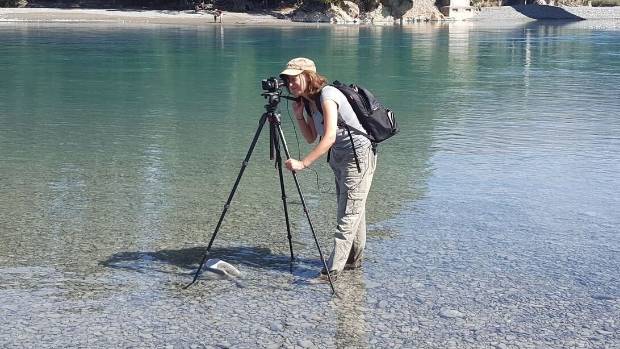 Seven Rivers Walking’s Gaylene Barnes she’s been blown away by the documentary’s reception so far.

“We’re finding the older generation in particular are getting really upset. In Auckland, a 50 year old white pakeha man was in tears as he told us developers were  creating tonnes and tonnes of sediment that was killing the local estuary. In Takaka, a beautiful old man who looked like Pythagoras came up to me with tears in his eyes and began to explain how the nitrate levels in beautiful Takaka marble aquifer were rising because of intensive dairying in upper valley. And whenever we’ve done a q-and-a, people just want to talk about their own river, lake or polluted estuary – there’s such a depth of emotion and feeling out there.

“You put it out there and you think, ‘oh, it’s just a little film’. We tried to put as much in there that was educational, but also inspirational. We wanted to keep heart and emotion in there.”

Also known as an artist, producer and film editor, Barnes says she first found out about the potentially perilous state of the region’s waterways when she was working on a project with fellow artist Jane Zusters in 2007, “where she talking about the Mackenzie Country being overrun by intensive farming”. As the issue began to gather protesters, Barnes began to talk to fellow producers about “getting something made with TVNZ”. 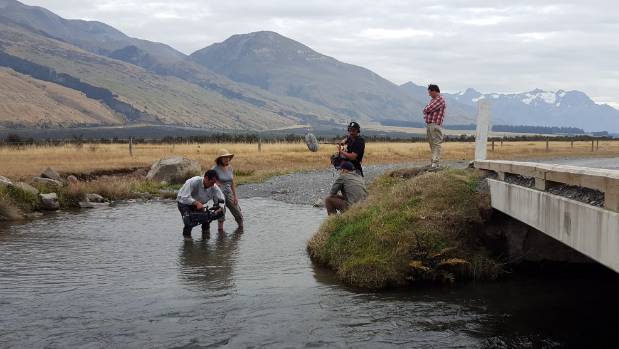 Seven Rivers Walking crew film Fish & Game’s Scott Pearson at a key spawning site on the Rakaia River which is currently under threat due to the clearance of native vegetation upstream.

“But it was always deemed too worthy,” she laments.

Earthquakes in 2010 and 2011 cut short both the protests and saw Barnes devote her energies to documentaries focused on the life and landscape-changing effects of those seismic events (including editing high-profile docos The Art of Recovery and The Grand Plan). However, her passion for a rivers project never went away, she says.

“I knew that if we didn’t do anything about our rivers, they are going to be lifeless in 30 years.” 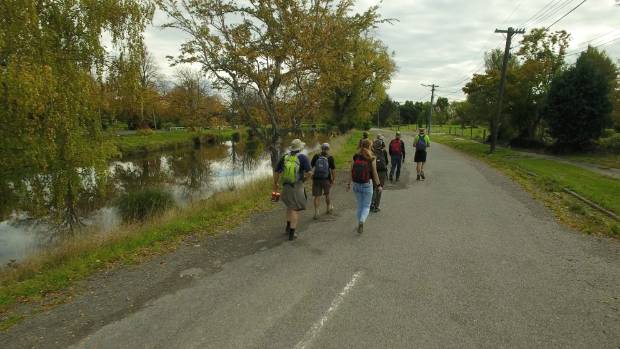 The catalyst for Seven Rivers Walking was a series of walks and talks around Canterbury waterways earlier this year.

Two community projects provided the catalyst for making the documentary this year, says Barnes. One was a hikoi in Selwyn, the other a series of seven river walks and talks organised by the Methodist Church around Lent. Keen to have it screen at this year’s NZ International Film Festival, that meant a race to get the film finished in time, admits Barnes.

“Bless Bill Gosden [the festival’s director], it was such a rough cut we gave him to watch, but he supported us all the way.”

With the New Zealand Film Commission now assisting by spreading the word to suitable international festivals worldwide and an on-demand platform secured, Barnes is hopeful that Seven Rivers Walking can take the next step – reaching as wide an audience as possible.

“I think the people who have come to see it so far are the ones who already really care [about the environment]. Hopefully, we can now get it to those beyond the choir.”

Previous StoryIt will be interesting…
Next StoryConstruction boom in Turangi…