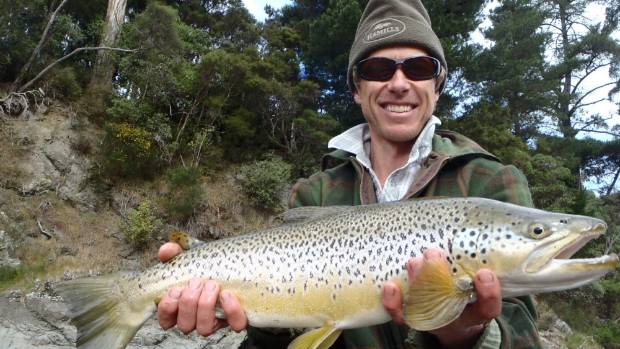 Jamie McFadden with the result of a afternoon’s fishing at his favourite spot.

OPINION: Last year I didn’t buy a fishing licence – the first time in over 30 years of fishing. When asked by two Fish & Game rangers for my fishing licence I said I had an exemption. I gave them a written document which outlined a number of reasons why I was exempted.

The first reason was “inappropriate use of licence holder funds “. The exemption noted that Fish & Game have used licence holder monies to run a nationwide media campaign targeting one sector of our society. I have no issue with raising issues about water quality but Fish & Games ‘dirty dairy’ campaign deliberately and unfairly branding all farmers as environmental vandals has done a huge amount of damage to community wellbeing. Farmers are not the only ones impacting water quality and targeting one sector in this manner is inappropriate conduct for a statutory organisation.

The second reason noted how Fish & Game deliberately spread misinformation about the state of our freshwater fisheries. As an example the exemption notes the winter fishing ban on all North Canterbury rivers was based on unsubstantiated claims that the fishery was in crisis and the crisis was being caused by farming. The truth is that there was no fish count surveys to back up Fish & Games claims, a range of factors affect fish numbers, and the main concern was caused by an anecdotal observation about the sea run trout fishery in the lower Rakaia river.

Similarly in 2014, Fish & Game went to the media with claims that Hurunui river trout were in poor health and had lower numbers. Again, these claims were unfounded and a deliberate ploy to make farming look bad.

The exemption noted that as a responsible angler I agreed to a range of principles such as leaving no rubbish, practicing catch and release, respecting private land and asking permission for access.

One of Fish & Games primary functions is to enhance access opportunities for anglers and hunters. However as a direct result of Fish & Games adversarial style, increasing numbers of landowners are refusing access across private land to recreationists. This was highlighted recently in the media with a Walking Access report noting that “Some landholders spoke to us of banning Fish and Game license holders from crossing their property due to what they perceive as negative stereotyping of farmers from the organisation. If this continues and grows, it could result in significant loss of fishing spots across the region.”

A recent article highlighting the decline in fishing licence sales is not surprising. The operation of and statute governing Fish & Game are in urgent need of review. This must also address the anomaly of an introduced species (trout) known to have decimated our native fish populations being protected by a statute and overseen by the Department of Conservation.

So what happened with my run in with the Fish & Game rangers? One of the rangers read the exemption, looked at me and said ‘Can’t really argue with that’ and they let me be. They were pleasant and there is no point in getting aggressive with rangers as they are just doing their job. The problem lies with the leadership of Fish & Game and a poorly drafted statute that allows them carte blanche with no accountability. That needs to change.

This bloke used a similar excuse to avoid paying a parking fine – study the technique carefully:

(PS Please note this problem cannot apply in Turangi – about the only well designed town left in NZ where planned infrastructure demand matches the supply of facilities – i.e. where you can park anywhere in town for as long as you like…  )

8 out of 10 cats does countdown: parking fine

The best way to get out of a parking ticket? Take it away Joe Lycett…